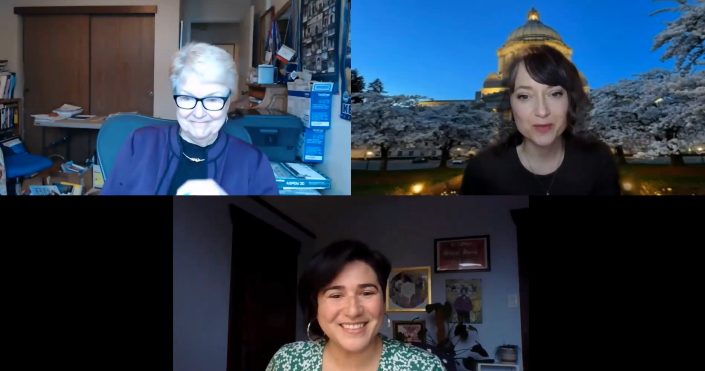 Legislators from both parties met virtually on Jan. 6 at the 2022 Washington State of Reform Health Policy conference to discuss their health care priorities ahead of the legislative session.

The 2022 session begins on Monday, and while it is a short one, there are a number of bills already filed and being drafted. Democrats Rep. Jessica Bateman and Sens. Emily Randall and Karen Keiser outlined their policy priorities during their panel.

Prescription drug costs are an issue that Keiser has devoted a significant amount of time to, and this session is no different. SB 5532 was introduced last month, and is a retooling of a bill that was approved, and then vetoed by Gov. Jay Inslee, in the 2020 session. The bill would create a prescription drug affordability board that would create upper payment limits for up to 12 prescription drugs a year.

These caps would apply to all purchases of the drug by a health plan, or impose an 80% penalty on increased revenue from the excessive price increase. It also bans drug manufacturers from taking their drug off the market in Washington to avoid the penalty.

“Congress has been unable to act, unfortunately, so we have had to do what we can at the state level,” Keiser said.

Bateman said she will be working to reestablish the Alzheimer’s and dementia collaborative, especially as the state experiences a ‘silver tsunami.’

“Families really need resources and support when they have loved ones going through that,” Bateman said.

Other bills include HB 1675, which is a technical fix exempt a dialysate manufacturer from the pharmacy practices act to ensuring that kidney dialysis patients can continue to have the procedure done at home; HB 1645, will adjust assisted living Medicaid rates to address chronic underfunding; and HB 1610, which deals with occupational licensure compact.

In the Senate, Randall said Democrats started their policy prioritization process this week. In 2022, they have interest in health coverage, as well as addressing the social determinants of health, housing, and community access. They hope to increase the amount of funding going towards primary and preventative care.

Randall also pointed to SB 5129, which would follow up on the legislature’s move to raise the age to buy tobacco to 21. The bill would ensure that minors in possession would receive substance use support to quit tobacco instead of facing criminal penalties.

The WA Cares Fund will also see changes, and lawmakers from both parties are looking at ways to adjust it. The program, funded by a 58 cent per $100 payroll tax, was set to begin collection this January, but has been temporarily suspended to allow the legislature time to make adjustments.

One proposed change, Keiser said, would be to ensure that residents who opted out of paying the payroll tax by purchasing their own long-term care insurance keep that insurance. She likened it to car insurance, where the state ensures people don’t just buy private insurance and then drop out to evade paying into the WA Cares Fund.

Republicans are also proposing fixes, and a repeal, of the fund, said Sen. Judy Warnick who was joined by Reps. Joe Schmick and Paul Harris on a separate panel at the conference.

“It’s a bipartisan finding that there are a lot of issues with the long-term care program,” Warnick said.

On behavioral health, Warnick signed on to SB 5645, sponsored by Sen. Manka Dhingra, which would expand the assisted outpatient treatment program. It’s designed to help people, especially teenagers, stay out of the system by providing additional behavioral health support.

“We have been allowing people to hit rock bottom before we give them any help,” Warnick said.

Harris said there will likely be more discussions on COVID, and that he would like to have a bill that lets the legislature weigh in on Inslee’s emergency power. He will also be running a tax on vaping products, and finding ways to fund more smoking and vaping prevention outreach by the state.

Schmick said he is thinking about how to address workforce shortages in health care, as well as voiced concerns over the 988 mental crisis hotline, which will come on-line next summer. While he said that Rep. Tom Dent is on the subcommittee dealing with the hotline, Schmick is worried whether there is enough rural representation on that panel to ensure the hotline will meld well with current emergency hotline systems and service delivery.