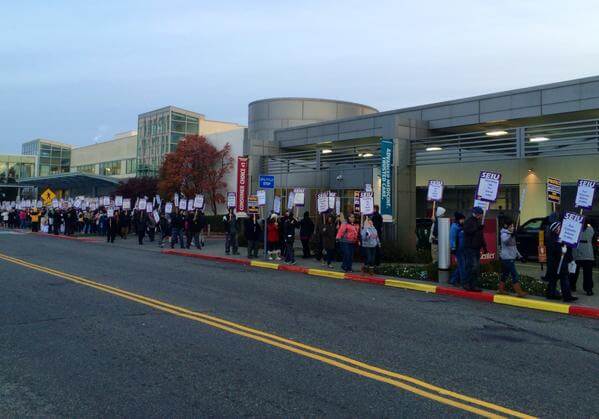 Kaiser Permanente, which serves 259,011 members in Hawaii and is the state’s only Medicare health plan, issued a statement on Oct. 20 after a union representing 32,000 health workers across Hawaii and California announced it would cast strike authorization votes. United Nurses Associations of California/Union of Health Care Professionals (UNAC/UHCP) is currently in contract negotiations with the health plan.

UNAC/UHCP announced on Oct. 18 that over 1,500 union members would vote to authorize a strike from Oct. 24-28, with results announced on Oct. 29. The votes — over proposed wage cuts for new workers —  come after over 20,000 UNAC/UHCP members in southern California voted to authorize a strike on Oct. 11 during negotiations for an ongoing national contract with the health plan.

“We had one set of rules before organizing, now management is trying to make changes that negatively impact us. The timing draws into question retaliation for organizing. Striking is never our first option but is the result of management’s refusal to work in partnership.”

Arlene Peasnall, senior vice president of human resources at Kaiser Permanente, issued a statement in response, saying  employees are typically paid around 26% to 38%  above the average market wage, which was “unsustainable.”

“If we continue to increase costs so high above the marketplace, we will become unaffordable and lose members. And the fact is: Wages and benefits account for half of Kaiser Permanente’s operational costs, a contributing factor to why health care is becoming increasingly unaffordable.”

Hawaii has historically had lower insurance rates than other states, due to the Hawaii Prepaid Health Care Act of 1974, which requires employers to provide health coverage. In June 2021, the Kaiser Permanente and the Hawaii Medical Service Association (HMSA) submitted their rate proposals for 2022. The Hawaii Department of Insurance will review and determine approval of the rates before open enrollment begins on Nov. 1.

If UNAC/UHCP is authorized to strike, it can determine a start date and duration. Accounting for a 10-day notice to Kaiser Permanente required by labor laws, the strike can begin as soon as Monday, Nov. 8.