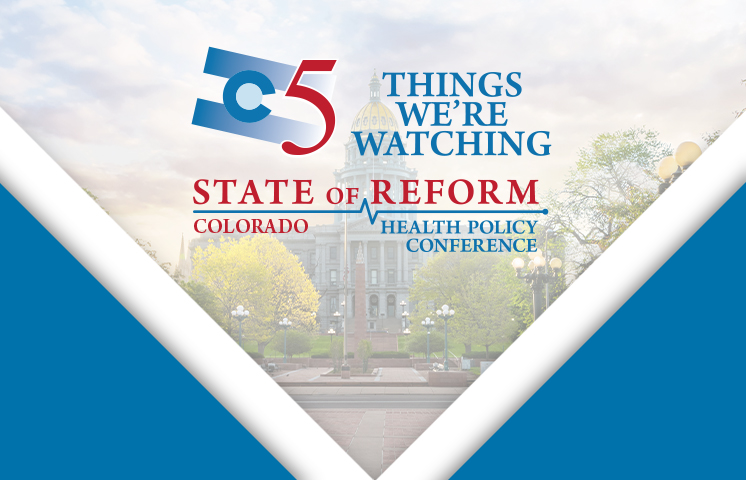 With the impacts of the omicron variant winding down, COVID cases in Colorado have steeply declined since their peak in mid-January. While hospitalizations have also decreased, residual workforce shortages continue to impact health facilities in the state.

Read about some of the state’s efforts to address these shortages below. This month’s newsletter also contains coverage of notable health bills, insight on Colorado’s first-in-the nation inclusion of gender-affirming care as an EHB, and some expert analysis of the state’s Health IT Roadmap.

1. Health bills on the move

Senate Bill 077, which would enter Colorado into the Interstate Licensed Professional Counselors Compact, is among the numerous health bills advancing through the legislature. While the agreement—which currently has two signed-on states—will only take effect once ten states join, supporters testified that the compact would ameliorate Colorado’s workforce shortage by removing the burden of relicensure for counselors looking to relocate to Colorado to practice.

Another bill hopes to modernize the 59-year-old Older Coloradans Act by allowing older Coloradans more say in policymaking for the state’s rapidly aging population. The bill would reorganize and increase membership on the Colorado Commission on Aging, create an advisory committee of state representatives to oversee implementation of the Strategic Plan on Aging, and create a “Lifelong Colorado” program to coordinate implementation efforts between different agencies.

To address the COVID-induced workforce shortage in nursing facilities, Gov. Polis has submitted a budget request package to the legislature to augment their workforce and keep the facilities afloat. HCPF’s Colin Laughlin told State of Reform the number of traveler workers in the direct care workforce has risen by over 15% since the pandemic began, resulting in a 600% increase in CNA salaries. This increased compensation cost is a key driver of Polis’s request for financial support.

The request calls for $20 million to be added to the FY 2021-2022 budget for temporary payments to nursing homes to support their workforces and ensure industry stability. It also includes $7 million for FY 2022-2023 to allow Medicaid-funded nursing homes to raise staff wages to $15 per hour—an effort to make their wages more comparable to those of the direct care workforce.

According to Cara Cheevers, behavioral health program director at DOI, Colorado’s “life-saving” inclusion of gender-affirming care as an essential health benefit has prompted numerous other states to contact her department for guidance on including the benefit in their own EHB lists. The benefit, which was announced in October and mandates coverage of surgical interventions like top surgery and behavioral health support for those with gender dysphoria, made Colorado the first state in the country to cover gender-affirming services in its benchmark health insurance plan.

Cheevers told State of Reform about Colorado’s long history of trying to cover this service, starting with the passage of SB 200 in 2008, which expanded protections from discrimination based on sexual orientation and gender identity. After extensive advocacy protesting the fact that, starting in 2017, no commercial plans were covering transgender health care, the state worked to establish these services by embedding them in the benchmark plan in October.

CDPHE recently allocated $1.8 billion to the Naloxone Bulk Purchase Fund—a fund created in 2019 to provide low-to-no-cost naloxone to local entities. According to Andrés Guerrero, overdose prevention manager at CDPHE, the additional funding is much-needed because the demands of the fund have far outpaced its capacity.

The new support will allow for broader access to the overdose-reversing drug, providing CBOs, law enforcement agencies, and schools a naloxone supply to use if an overdose occurs. “It is important that we catch folks of all areas of drug use so we can work on prevention and on folks who are currently using,” Guerrero said.

During a recent CHI webinar, experts explored the policy recommendations included in the most recent Health IT Roadmap, released by the Office of eHealth Innovation in November. Panelist Stephanie Pugliese, state health IT coordinator and deputy director at OeHI, explained that the office ensured there was robust stakeholder input in the development of the roadmap and identified opportunities for collaboration with work already underway.

Sara Schmitt, also a panelist and the managing director of research, evaluation, and consulting at CHI, said the roadmap’s focus on data sharing between provider groups is essential because it will allow for the coordination of whole-person care between different services. She said the roadmap provides an “on-ramp” for establishing a statewide health data sharing platform, “where providers, agencies, and Coloradans could be able to access, share, and receive needed data.”