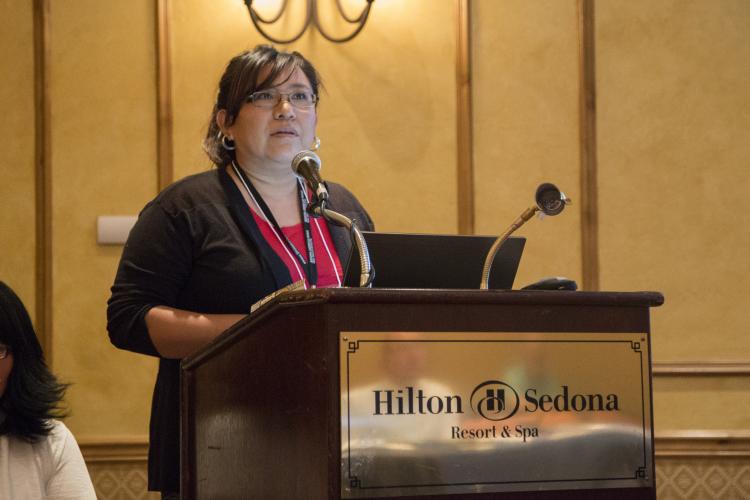 Kim Russell is the executive director of the Arizona Advisory Council on Indian Health Care (AACIHC). In this Q&A, Russell discusses the pandemic’s disproportionate impact on Arizona’s Native communities, and the health disparities already present in those communities that the pandemic has exacerbated.

Soraya Marashi: What has the impact of the pandemic looked like for Native American communities in Arizona?

Kim Russell: “First and foremost, [the impact] is really a lot of loss of life for a lot of our families. And if not a loss of life, a lot of hospitalization … so I think that impact is the greatest we’ve seen so far. I think that impact was really acute because you’d know someone’s fine one day and two weeks later, you hear in the community that they contracted COVID and they’re gone.

I think there’s a lot of fear in our community, but at the same time, a lot of misinformation, a lot of confusion. So, the impact has been one of sorrow and just overall sadness in our communities. But the impact is also a good thing. It did highlight disparities that we have in a different way, because we’ve had these disparities for decades …

… the CDC guidelines to wash your hands and to social distance were really difficult for American Indian people, and I imagine it would be difficult for a lot of low-income people. For American Indian people, it was really difficult to self-isolate because [we live in] really multi-generational homes and when we were told to self-isolate, it was difficult to do that because … we don’t have adequate housing to really self-isolate. So that recommendation wasn’t adhered to, not because we didn’t want to but because we couldn’t.

The hand-washing, at least for a few tribes, a lot of them don’t have running water, so to wash your hands was just not realistic as well. So, [the pandemic] shone a spotlight on infrastructure issues [and] community issues.

SM: What Native communities in Arizona have been hit the hardest? I know the Navajo Nation has recently been experiencing a surge in cases.

KR: “The data says one thing, but it’s hard to quantify part of it by just looking at numbers, because one death in a family [has a major effect], especially in small communities. It’s hard to say these are the hardest hit communities, and even tribes that didn’t have a lot of COVID cases … but they had to give up certain things in order to not have those high numbers and they had to go and shut down, they had to restrict travel … so in that sense, they were hardest hit. Mental health was an issue. When you talk about hardest hit communities, if you’re just looking at data, number of cases … that’s easy to quantify.

But if you really want to talk to tribal leaders about who’s hardest hit, they’ll all give you different insights … because there were communities … that didn’t have very many COVID cases, but in order to achieve that, they shut down completely … and it really took a toll on their mental health … There’s a lot more that can be quantified, we just don’t quantify it.

I can’t necessarily say that any one community was hardest hit. They all have been, especially because they’re small and the infrastructure’s an issue for most of them. They’ve had to really sacrifice a lot throughout the pandemic, and they still are.”

SM: To what can we attribute the high vaccination rates in Native American communities in Arizona?

KR: “I did know that we had high vaccination rates pre-pandemic … I’m not sure why we embrace it so readily. Maybe because we still have stories of generational biological warfare within our community. We still tell those stories about … the federal government trying to eradicate us with [infections] like smallpox. We know that that can happen.

Other than that, we know that there’s other ways to get sick, and you don’t necessarily have to see it. So, maybe that’s why we embrace that information. The other thing I could think of is that our health system is really able to encourage vaccination rates. Because we’re a closed [health system], we’re not like the general population system … I think that closed system of care does encourage high vaccination rates.”

SM: What has the pandemic taught us about access and affordability of care for Native American communities in Arizona?

KR: “We have access to care … it’s just not comprehensive. It’s just not at a higher level. And so you really saw a lot of our patients [needing care] outside of our [IHS] system. Especially for hospital stays, ventilators … access to that higher level [care] … is an issue. So, in terms of affordability, not a lot of us have to worry about that affordability issue if you live on the reservation. But, it’s different for those who don’t live on the reservation [where] affordability may be a factor. So, it really depends on how you enter the system.

… If you’re going to get sick and need a higher level of care, you want to go back to your home hospital. If you’re out here and you go to Banner or what have you, and you don’t have that insurance coverage, then it becomes an issue, and even with insurance there’s always co-pays and other things associated with that. So yeah, I think it really depends on where you enter into that health care system that affordability will be an issue. But we’ve learned how to navigate that system … I know people who will actually travel four or five hours to deliver their babies because they know they deliver it within the system. They don’t have to bear that cost.

In terms of access to prevention, I think we have a lot of people that are willing to spread the message of prevention. It’s just being able to invest in them so that they can be sustained. And our system doesn’t really invest in prevention. I’m talking about nationwide, and because we don’t invest in prevention strategies, that’s why we end up with these higher levels of care.

I think what’s really been highlighted during COVID has been the lack of housing … We’ve known it forever, but it really [has been talked about a lot] because … there were volunteers that wanted to help provide care on the reservation, which we really needed. But the issue is, where do we house these individuals? It’s not just like we can rent apartment buildings for them or anything like that. We didn’t know where to house them … Housing for individuals has been a big issue, but because of the CDC guidelines, we … really had to have some conversations about [why we aren’t adhering to the guidelines].

… In terms of social determinants of health, [COVID] really shone a light on all of them. Whether it’s transportation, education … I feel like it really highlighted housing, and also highlighted the lack of broadband. The ability for people living in tribal communities to communicate via broadband has impacted our educational system, our health care system, [and] people’s ability to work from home.”

This interview was edited for clarity and length. Image: Arizona Center for Rural Health.