Children aged 15-17 had the highest mortality rates among youth in Arizona in 2020—as well as over the last decade—followed by children aged 1-4. 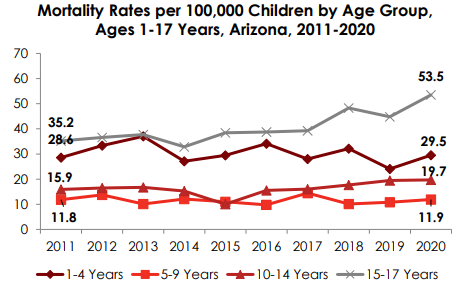 The number of deaths among different racial demographics were reflective of their share of the state population. Hispanic children—who account for 45% of the state’s youth population—had the highest mortality rate of all races/ethnicities at 40%. The next most-represented demographic were white children, who make up 41% of the youth population and accounted for 35% of total deaths.

The department said 47% of the total deaths were preventable. It says a death was preventable “if the community (education, legislation, etc.) or an individual could reasonably have done something that would have changed the circumstances that led to the child’s death.”

The full list of recommendations begins on page 80 of the report.