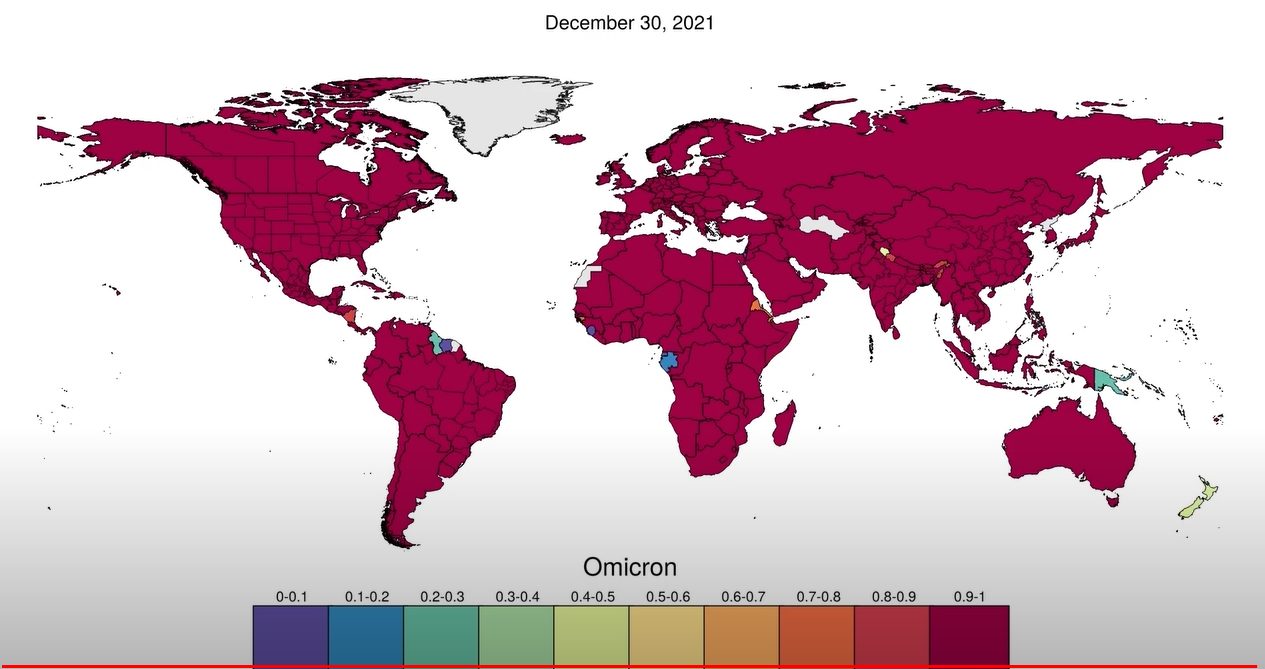 Omicron will bring largest waves of COVID to Washington, Oregon

New projections from the University of Washington’s Institute for Health Metrics Evaluation predict that Washington and Oregon are headed for the highest numbers of new COVID-19 infections so far in the pandemic, driven by the emerging omicron variant.

While there are similarities in the projections for both states, like an initial dip in deaths before seeing increases, there are differences in magnitude. For instance, deaths in Oregon are expected to decrease, and only moderately increase, while in Washington deaths are expected to be higher, but peak more quickly.

The new modeling took more than a month to complete, and takes into account a number of factors, including waning vaccine efficacy, the omicron variant, and overall immunity. Over the next two months, the IHME expects 60% of people in the U.S. will catch omicron, with more than 90% likely experiencing an asymptomatic infection.

On a global scale, Dr. Christopher Murray, IHME director, said he expects more than 3 billion cases of omicron infections within the next three months.

But based on data from South Africa, the UK, Denmark and Norway, the models expect that hospitalizations resulting from a COVID infection will be between 90-96% lower than rates seen with the delta variant. However, despite this hospitals will likely be in a similar position to last winter, with variation across states.

There’s reason to believe that the infection fatality rate will also be between 97-99% lower than for delta, but the greater number of people infected will lead to moderate numbers of hospitalizations. This could still mean a national peak daily death count of more than 2,000 by February, according to the IHME.

Masks and vaccinations remain the two most important tools for fighting omicron, and other COVID variants. Modeling also included scenarios outlining what would happen if 80% of people wore KN-95 or N-95 masks in public, and unsurprisingly, it shows significant declines in cases, hospitalizations, and deaths.

On policy, the IHME said it does not believe elementary or secondary school closures would be helpful due to rapid spread, and reduced hospitalization and death rates. At the same time, aggressive lockdowns to control transmissions may reduce pressure on some hospital systems, but will come at social and economic cost.

Due to the variant’s high transmissibility, it could mean that contact tracing could become ineffective, and a potential waste of resources. The report states that instead, projected stress on hospitals and hospitalization rates should be used as a metric to drive policy at the local level, instead of raw infection numbers.

In Washington State, daily deaths are expected to drop through the end of January, before picking up to about 15 daily in late February and March.

Over the coming months, through the end of April, daily infections are expected to skyrocket, reaching heights more than five times seen in the previous high peak this fall. In the most optimistic scenario, where 80% of residents are wearing masks, more than 28,000 people are expected to be infected daily by early February. In the likely scenario, nearly 39,000 people will be infected each day.

Good news comes from hospital resource projections. Hospital use for both ICU and all beds will likely remain below numbers seen during the fall delta surge. However, health care systems across the state are experiencing worker shortages.

In Oregon, daily deaths are expected to remain lower than in Washington after beginning to drop in mid-December. While the model expects cases to rise in February, they should hold relatively steady.

Daily infections are expected to spike in the coming weeks before reaching a peak in early February of roughly 25,000 cases. That’s also four or five times greater than the previous peak seen during the fall delta surge. In the optimistic, mask-wearing scenario, daily infections could be kept to about 16,000 daily cases.