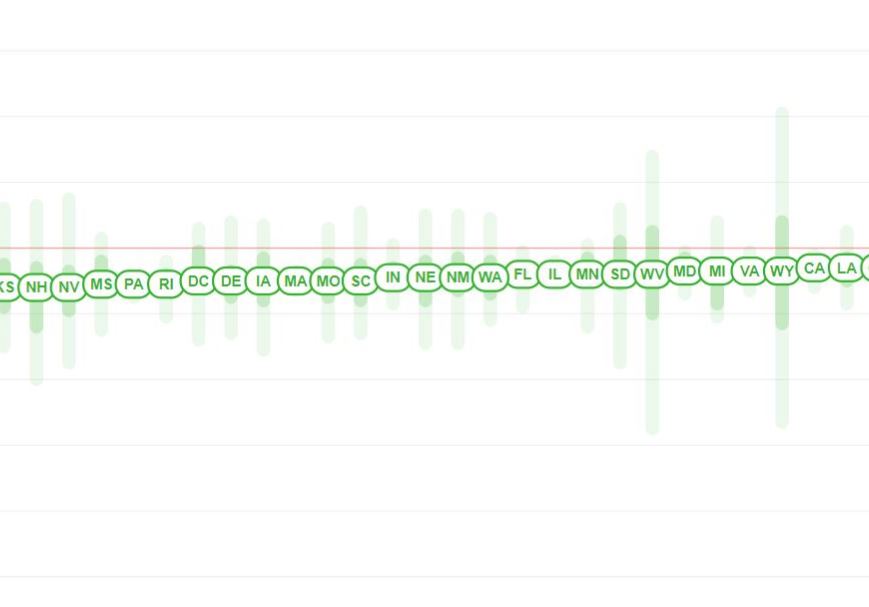 Texas is showing a stark increase in its COVID reproductive factor. Maybe that doesn’t matter.

Early estimates of this reproductive factor in China had an R factor of 2.6. The World Health Organization later moved that number to 3.4.

However, once the United States went into a state of social distancing, opportunities for infection began to be limited.

In some areas, like New York, it was too late. The disease spread took off quickly, well before the lock downs began. In other states, like Alaska or Montana, the disease never quite got off the ground ahead of social distancing measures.

So, states were able to quickly move their R factors lower. Anything over an R factor of 1 means the disease is continuing to spread, increasing in total numbers of infected folks more rapidly than folks are discharging the virus.

R factors under 1 mean the virus is not spreading, and is moving in the direction towards becoming limited or extinguished in a given community.

Rt.live is a site that aggregates public data on COVID infections from across the country. It is updated regularly and shows the R factor for all 50 states. It’s a good tool to access and track large data sets from this COVID pandemic.

The screen grab below shows the R factor among US states as of the evening of May 26th.

As you can see, most states are under an R factor of 1, with many states around R=0.9. Even those states that are red are significantly lower than the R=3.4 projected by the WHO for communities doing nothing to address the spread.

Those states with the greatest spread are still pretty close to a factor of 1.

If we look at this same order of states, and review where they were 6 weeks ago, a few things stand out. One of those things should be concerning.

Certainly, 6 weeks ago, there was a little varation among states compared to today. Some states, like Kentucky and Kansas, were heading in the wrong direction. They’ve since turned things around, demonstrating that policy and community efforts can be effective to limit the spread of the disease.

In fact, every state that had an R factor above 1 six weeks ago has now moved down below R=1, with the exception of Maine.

However, one state moved from approximately 43rd on this list six weeks ago to third on the list today: Texas.

You can see that shift over time. 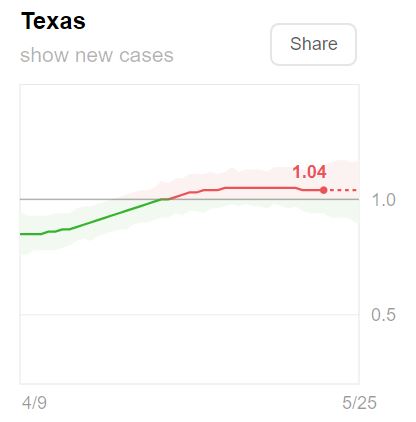 That move represents a 22.4% increase in transmission in Texas during the last six weeks.

That shift seems signficant. Texas is now reporting among the highest number of daily confirmed infections of all of the states in the US.

Worldometers tracks confirmed infections and deaths from all public information sources. It now lists Texas as seventh overall among states with a new daily infection rate about double that of states like Florida, Pennsylvania and Massachusetts, though daily numbers vary.

It’s not clear, however, whether this will amount to a significant impact to the health of Texans. Florida was at one time considered on the precipice of a large outbreak, like that which occurred in New York. However, that didn’t come to pass.

Projections from the Institute for Health Metrics and Evaluations, one of the country’s leading outlets for disease modeling, projects the number of infections and deaths in Texas will continue to trend downward.

These data points would appear to be in conflict: transmission is markedly on the rise while projected deaths continue to trend downward.

Only time will tell which data point was most accurate.