At the end of this month, FamilyCare will cease operations following a long standing argument with the State of Oregon about rates for the Portland-area CCO.

A skeleton crew will remain to manage the “run out” of payments to providers that have otherwise cared for patients while FamilyCare remained contracted with the State of Oregon. Audit and compliance matters will remain for the plan as well.  FamilyCare will also need to determine what it intends to do with its small book of Medicare business.

Observers of this matter generally fall into two camps, based on conversations I’ve heard and input I’ve received over the last few months.

In truth, the reality may be softer versions of both mixed together.

In many ways, however, whether one finds this to be a sad time in Oregon Medicaid or the final result of a long, public negotiation over rates, I think there are four key implications of FamilyCare’s closing that the rest of the Oregon health care market should take note of.

I’m not sure Gov. Brown comes out of this looking too good.  Based on the conversations I’ve had with Oregon health care leaders over the last year, there are few executives or advocates in Oregon health care that are enthusiastic about the Governor who, in almost any different year with a different president, might be the first Democratic governor to lose re-election since 1978.  That’s not to say health care leaders are going to vote for or against Gov. Brown as a result of the FamilyCare matter.  But, generally speaking, I’m not sure this is in any way helpful to Gov. Brown politically.

Regardless of what happens with Gov. Brown, however, what appears clear is that where other OHA directors have struggled in recent years, this OHA director knows how to manage complex political, policy and procurement matters like this FamilyCare issue.

Say what you will about Jeff Heatherington (and the range of opinion about Jeff is broad), but he is a formidable strategist with a deep well of political experience, connections, and know-how.  There are few in Oregon politics – not just health care – that have enjoyed a run of political success as has Jeff.

This didn’t end because Gov. Brown is an effective administrator that had it in for FamilyCare.  This didn’t come about because OHA Director Patrick Allen wanted to put FamilyCare out of business.

This came to an end as a result of Pat Allen’s administrative steadfastness, willingness to try to work solutions to the ground, and openness in relying on outside, independent minds to help find solutions.

When he had reviewed the matter, brought in outside resources for help, and really dug into the questions FamilyCare posed, Allen was left with the offer OHA had on the table prior to his arrival.  FamilyCare chose not to take it to avoid losing money again in 2018.

But, Allen ran this issue through the ringer to try to sort out a complex situation with significant patient and provider repercussions.

I’m sure there are plenty of criticisms if I were to listen more closely, but I think, generally speaking, Allen emerges through this in a very strong position.

Moreover, vis-a-vis the other CCOs in the next round of procurement, Allen is now in a significantly stronger position to ask for – and receive – significant concessions.  He can be a key force for innovation in Medicaid where his role was otherwise somewhat in question upon entering OHA.

Smart folks might argue that Gov. Brown “let Pat do his job,” and that such trust is a sign of good leadership, delegating to competent, successful staff.  There is some truth there.  But, Gov. Brown has developed a reputation of being arm’s length on health policy and financing.  This looks like Allen did good work managing a complex problem more than anything else.

There are additional political issues ahead for CCOs, including rates, consolidation, and new structures of payment for pharmacy and behavioral health.  Those will be difficult to address, and politically complicated.  Pat Allen is in a very strong position, however, to be able to address those given the way this has played out with FamilyCare.

I like Jeff Heatherington.  He has always been generous with me, both in spirit and in support of State of Reform.  I consider him a friend.

There are a number of folks that have a different view, which I respect.  Many of those folks I consider friends, too.  They’ve gone through wars with Jeff and his colleagues, sometimes on the same side, sometimes not. Those can leave scars which can take a while to heal.

But, for anyone excited by the prospect of Jeff Heatherington leaving the health care stage as a result of this, think of what has just happened:  Jeff Heatherington lost his contract, and with it his overhead, his responsibilities and accrued financial losses.

He keeps the more than $100m in reserves he’s accumulated over the years.

Sure, those reserves need to go to a non-profit that is related both in geographic scope and in area of service.  But that will be a philanthropic non-profit headed by Jeff.

In other words, Heatherington has just been given the opportunity to lead one of the more prominent health care foundations in Oregon.  And, arguably, outside of the OHA itself, the organization could quickly become among the moret dynamic forces in Oregon Medicaid policy.

With that platform, Heatherington will be able to be an even stronger advocate for the issues and areas in which he is interested and passionate.  He will have fewer burdens (operational responsibility is gone), much less downside (his contract is gone), and a lot of time to be able to build a focused, strategic movement for better health care in Oregon, better transparency in Medicaid, and better policy from Salem.

In other words, a significant portion of what Jeff wanted to do as CEO of FamilyCare, he can now do as a philanthropic force much more easily and effectively.

That puts a very thick, very silver lining on an otherwise cloudy time in FamilyCare’s history.

3.  There are now lots of FamilyCare employees on the market

There are another 300 quality health care professionals now on the Portland labor market looking for jobs.  That’s a significant number of resumes floating around even in a large market like Portland.

In theory, that might put some downward pressure on compensation in the near term for mid-level and senior talent as FamilyCare employees are absorbed into other entities. It’s possible existing organizations will “trade out” staff from their organizations to make room for the talent that FamilyCare has let go.  It’s likely that we’ll be in an unsettled period while the dust clears from FamilyCare’s departure.

However, not everyone will get absorbed.  Some professionals from FamilyCare will need to look elsewhere for work, either out of state or out of health care.  This is an unsettling reality for the FamilyCare employees that were otherwise on the cutting edge of doing innovative care design, payment and coordination in health care.

And, in talking with Jeff Heatherington, this was unequivocally his greatest concern related to rates over the last few years:  his employees.  Medicaid beneficiaries will get allocated to other CCOs.  Providers will form new contracts with plans.  Even Heatherington will be fine, as mentioned above.

But the FamilyCare employees will take the brunt of this transition, he argued.  And, he’s probably right.  Though Heatherington tells me that many of his employees which were released at the end of 2017 were hired quickly by other organizations as Portland area organizations staff up to handle their increased populations.  So, it’s entirely possible this will be a fleeting moment of transition.  We’ll see.

4.  Rates are going down in the Portland area

The state’s basic premise for the differential in rates between FamilyCare and Health Share was that the two Portland-area CCOs had populations with different acuity profiles.  Health Share had sicker patients, the OHA argued.  Two independent actuaries hired by the OHA confirmed that the rate differential was appropriately set.

Assuming that is all the case, one of two things must happen.

Regardless of what happens in the near term, in future procurement years starting in plan year 2019, Health Share’s rates will be set in part on the healthier risk from FamilyCare.  I know that actuaries will tell me that will all come out in the wash – that the rates will still be actuarially sound, that a broader risk pool is better for financial stability, etc.  But, for those delegated entities as well as for Health Share itself, if the OHA’s argument all along is accurate, their per member per month premium is going to fall.

According to a recent analysis by the OHA, Health Share rates will fall from a weighted average PMPM of $410 to $386. 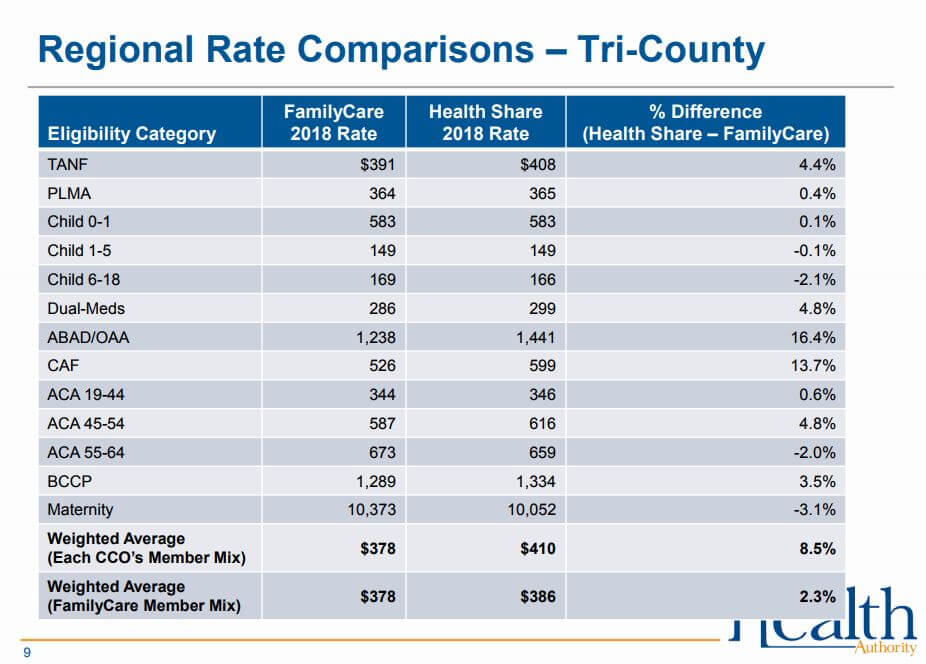 Historically speaking, that’s a trend Health Share providers are not used to seeing.

First, the OHA pegs this number at about $12 million through a different calculus. While FamilyCare believes the differential will be $75 million.  My $44m number might be wrong, but it has the advantage of being in between the two parties’ perspectives.

Secondly, the number I’m using of $44m is the total “all funds” number.  That premium is funded through both state and federal funds.  So the actual impact to the state will be something less than that.  Assuming Oregon’s FMAP is about 65%, that would mean only approximately $15.4m of that would be left to the state to fund in order to draw down a federal match of $28.6m.