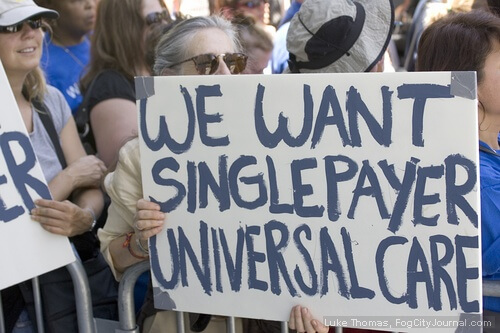 There are two significant trends in public health care that are under the radar of federal policy discussion but are central to the conversation happening in most states.  California is a primary example of what I mean.

But, it turns out that these two trends are to a degree in conflict with one another – not because they are antithetical to one another.  In fact, they are largely supportive of one another in principle.  However, they are both so transformational to the current system that they each take extraordinary amounts of political capital.

And, I would argue that the more we spend political capital on one element, the less we’ll have available for the other.

Trend 1:  Blurring the lines between lines of business 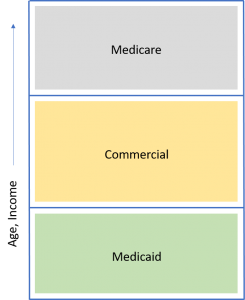 Now, truth be told, it’s a little more complicated than this.

We also have the Veterans Administration system.

We have what I call the “Extra-Systemic” market, meaning those health care payment models that are largely outside of the mainstream health care financing model.  That could be a cash-based model, a concierge care model, or traditional care givers specific to cultures or ethnic groups. 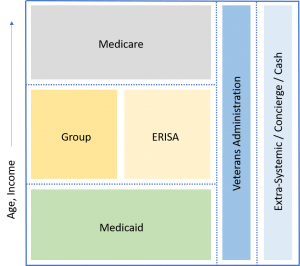 The movement towards a unified purchaser of health care, particularly like the single payer model espoused in California’s SB 562, calls for essentially a breaking down of the various differentiators and segmentation of these lines of business.

For illustration purposes, I’ve shown this as dotted lines between the various lines of business.

More correctly, however, I think single payer advocates generally see the new health care system as the next graphic:  A “Unified Health Care Purchaser for All Residents.”  “All Residents” obviously includes everyone, regardless of eligibility in the current system (like the VA, or Medicare) and regardless of an individual’s resident or citizen status. 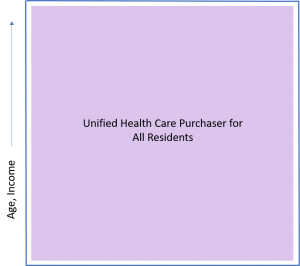 To be clear, California’s SB 562 – like most single payer advocacy efforts – has an idea of the end game, but no clear sense of either the details of that final program, or the incremental steps to get there.

In California, SB 562 has no clear vision for what a “single payer” might look like or the details involved, but it is clear that it won’t be implemented until it can be paid for.

What is generally clear, however, is that the lines of business as currently constructed will be eliminated.

This increasing political interest in a Unified Health Care Purchaser is becoming a significant trend.  It was given voice by Sen. Bernie Sanders in 2016, and it will likely be a central part of the backlash to the AHCA.

This trend is one that essentially unifies the financing silo of traditional medical care.

Which brings us to the second innovative trend.

Trend 2:  Blurring the lines between medical and non-medical

If one trend is to unify the medical financing silo vertically, a second trend is to broaden the line of business into new segments beyond traditional medical services. 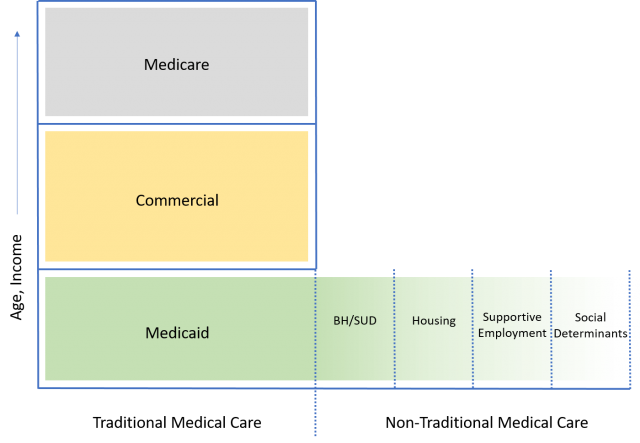 While some advocates argue for moving up this silo, state agencies are working to broaden Medicaid beyond Traditional Medical Care.

In other words, in addition to the traditional medical benefit, state agencies are adding in benefits related to behavioral health and substance abuse.  More innovative states are including Housing provisions or Supportive Employment.   To varying degrees, many states are moving towards integrating the social determinants into the Medicaid strategies.

Viewing these in context with one another

Both trends are important.  I might argue that the Unified Health Care Purchaser strategy is increasingly a political response to the setbacks of the ACA and the tumult associated with the AHCA.

Meanwhile, the broadening of policy in Medicaid beyond Traditional Medical Care might be seen as a policy response where state agencies see room for innovation without political obstacles.

Doing them both at the same time is likely impossible.

So, a policy question stakeholders might ask is “which of these two trends should we get behind, because we won’t be able to get behind both.”