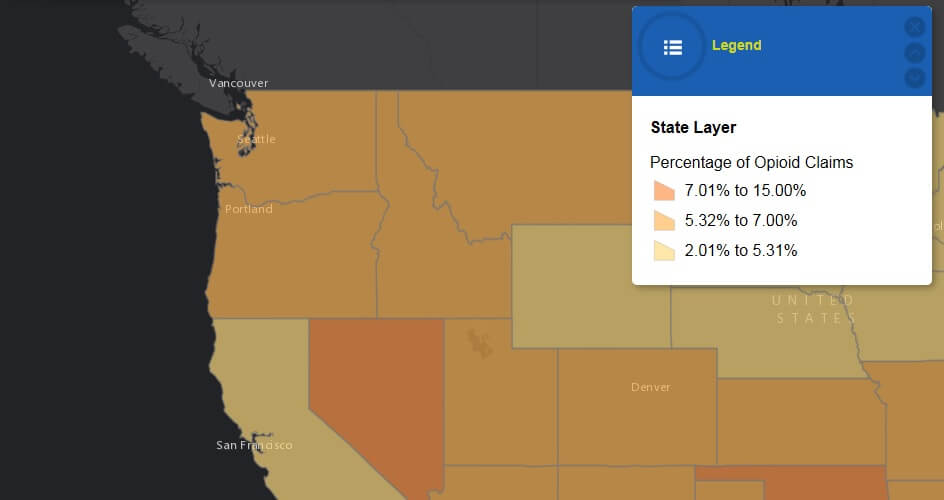 Today, the Centers for Medicare & Medicaid Services (CMS) released an interactive online mapping tool which shows geographic comparisons at the state, county, and ZIP code levels of de-identified Medicare Part D opioid prescription claims – prescriptions written and then submitted to be filled – within the United States. This new mapping tool allows the user to see both the number and percentage of opioid claims at the local level and better understand how this critical issue impacts communities nationwide.

“The opioid epidemic impacts every state, county and municipality. To address this epidemic, while ensuring that individuals with pain receive effective treatment, we need accurate, timely information about where the problems are and to what extent they exist,” said CMS Acting Administrator Andy Slavitt. “This new mapping tool gives providers, local health officials, and others the data to become knowledgeable about their community’s Medicare opioid prescription rate.”

Deaths from drug overdose have risen steadily over the past two decades. In 2013, overdose from prescription opioid pain relievers claimed more than 16,000 lives, with more than 145,000 people dying from these overdoses in the last decade. Heroin deaths have also been climbing sharply, more than doubling between 2010 and 2013. The resulting health, social, and economic consequences for communities across the country are enormous.

The data used in this mapping tool is from 2013 Medicare Part D prescription drug claims prescribed by health care providers and does not contain beneficiary information. The data set, which is privacy-protected, contains information from over one million distinct providers who collectively prescribed approximately $103 billion in prescription drugs and supplies paid under the Part D program.

The data characterizes the individual prescribing patterns of health providers that participate in Medicare Part D for over 3,000 distinct drug products. Of the 1.4 billion total Part D claims per year, there were approximately 80.7 million opioid claims for 116 distinct opioid products contributing to $3.7 billion of the total Part D prescription drug costs. By openly sharing data in a secure, broad, and interactive way, CMS is supporting a better understanding of regional provider prescribing behavior variability and is adding insight to local health care delivery.

CMS and the U.S. Department of Health and Human Services (HHS) believe that this level of transparency will inform community awareness among providers and local public health officials.

The Administration has made addressing opioid abuse, dependence, and overdose a priority, and work is underway within HHS on this important issue. The evidence-based initiative focuses on three promising areas: informing opioid prescribing practices, increasing the use of naloxone (a drug that reverses symptoms of a drug overdose), and using medication-assisted treatment to treat opioid addiction.

As part of this initiative, HHS is working through the Centers for Disease Control and Prevention (CDC) to develop opioid prescribing guidelines and supporting training and tools for providers to make informed prescribing decisions. The Substance Abuse and Mental Health Services Administration (SAMHSA), Food and Drug Administration (FDA), National Institutes of Health-National Institute on Drug Abuse (NIH-NIDA), and Office of the Assistant Secretary for Health (OASH) are active partners in implementing the Administration’s opioid initiative.

For more information on CMS’ efforts to address the growing problem of abuse of opioids in the Part D program, read the Part D Overutilization Monitoring System Summary.