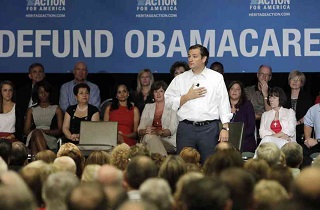 Senator Ted Cruz took control of the Senate floor earlier this afternoon, promising to “speak in support of defunding Obamacare until I am no longer able to stand.”

Cruz can no longer stop a Senate now in motion from ultimately returning a clean continuing resolution to the House in the few days before a government shutdown is scheduled to take effect on Oct. 1. The latest upper chamber will take the first procedural vote on a House spending bill that defunds the ACA is on Wednesday, Sept. 25, at 1pm – a reality made clear by Senate Majority Leader Harry Reid (D-NV) in a broadcast to the world this morning when he opened the Senate.

“I want to make sure everyone understands: There is no filibuster today,” Reid said.

In other words, it’s all over for the legislators who wish to defund the ACA. In a request to the Congressional Research Service, Senator Tom Coburn (R-OK) inquired whether these motions in the Senate would actually be able to defund Obamacare. The answer returned: No, not really.

However, Cruz promised to offer plenty of those on Tuesday in vowing to talk on the floor for hours about why Obamacare should cease to exist. He was supported at times by Senators David Vitter (R-LA), Mike Lee (R-UT), and Rand Paul (R-KY).