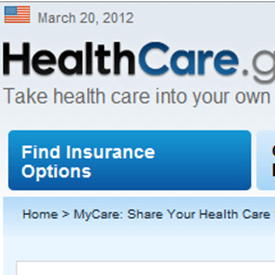 We’re seeing a testing of the waters with modest participation from the nation’s largest carriers. Cigna’s David Cordani says “We do not believe this is going to be a massive either top-line or bottom-line driver for the corporation. We think this is just a step forward for us.”

More on Cigna’s plans from Reuters:

The company will offer health plans to about a dozen metropolitan regions in Texas, Florida, Tennessee, Arizona and Colorado, Chief Executive David Cordani said in an interview on Monday.

Under the Affordable Care Act, all states are due to begin selling healthcare to individuals through online marketplaces, with enrollment opening on October 1, 2013. Most insurers have said that they plan to participate in these exchanges in their existing markets.

Cigna, the No. 5 U.S. health insurer, had previously indicated that it planned to expand its business to sell on a limited number of exchanges in 2014 but had not given details. Most of Cigna’s health insurance business in the United States is administering benefits for corporations.

“We do not believe this is going to be a massive either top-line or bottom-line driver for the corporation. We think this is just a step forward for us,” Cordani said.

The deadline for applications to sell insurance in the 33 states that have chosen to have the federal government run the exchanges closed on May 3 after being extended a few days. Applications in many of the 17 states that are operating their own exchanges, such as Colorado, were due last month.

Texas, Tennessee, Florida and Arizona, where Cigna will offer plans, all defaulted to the federal exchange model.

With open enrollment due to start October 1, reform advocates have begun to worry about enrollment and how effectively federal and state officials can recruit consumers, particularly the young and healthy, from among America’s 49 million uninsured.

Official estimates anticipate about 7 million people will obtain private insurance through the exchanges in 2014 and that many will qualify for federal subsidies to help pay premiums.

The success of the exchanges will depend not necessarily on hitting the government target enrollment numbers, but on whether customers who use them can access doctors and like the insurance products, Cordani said.

But there are still many unknown factors, such as the details of the products on the exchanges and how affordable they will be, and Cigna has not set market share targets for 2016, he said.

“You’re going to have a meaningful market there if the exchanges are operating as designed over the long term,” he said.