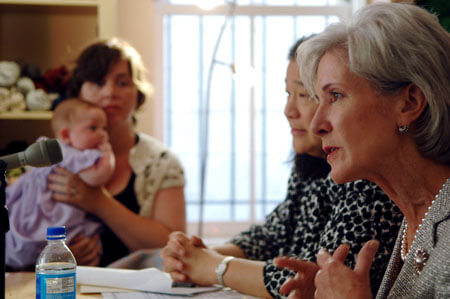 Sec. Sebelius Reflects on Unanticipated Confusion from the ACA

Health and Human Services Secretary Kathleen Sebelius said she underestimated how long the politics of health reform would last and didn’t anticipate how much confusion the slow rollout of the legislation would create.

Sebelius said she had expected the Supreme Court ruling and President Barack Obama’s reelection would tamp down some of the “relentless and continuous” politics. But the controversy goes on.

“We find ourselves still having sort of state-by-state political battles,” which is creating confusion about what benefits people can access and how, particularly in states where governors have been vocal about not participating in the law, she said. “So getting that word out and setting up the infrastructure has been more complicated,” she said at the Harvard School of Public Health on Monday.

Sebelius said HHS is “very closely” monitoring state progress on the exchanges and Medicaid expansion, which are due to go live on Oct. 1.

“We are doing a lot of very active one-on-one conversations with states around the country,” she said. “It’s a big lift, and I would say it’s a job that no one has ever done in this country before — not to put too fine a point on it.”

Sebelius added that the law’s slow timetable — it passed in March 2010 but the major insurance exchanges won’t cover people until 2014 — has been confusing.

“Probably no one fully anticipated when you have a law that phases in over time, how much confusion that creates for a lot of people. So that has been difficult,” Sebelius said. “When the law was signed and people immediately did not get affordable health insurance, they were surprised and a lot were disappointed but now understand that this was a gradual phase-in.”