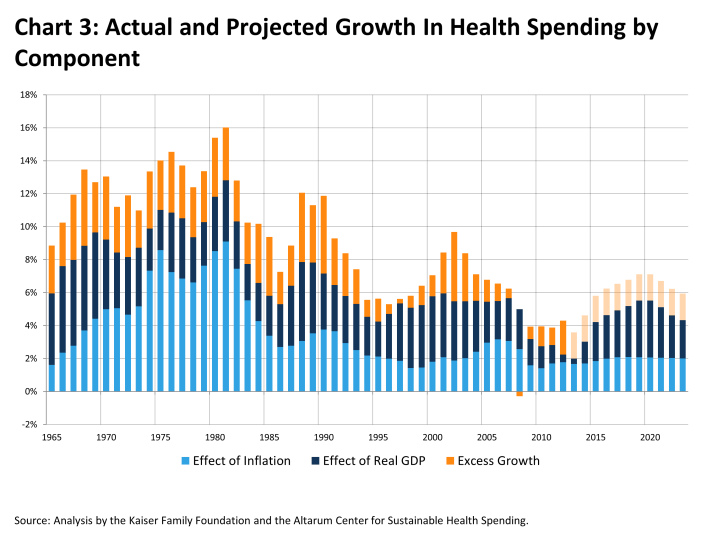 KFF’s Altman and Levitt: We Still Have a Health Care Spending Problem

With every new report about the recent slowdown in health-care spending there is speculation in the media that the problem of rising health costs has somehow been solved or cut down to size.

We have seen this movie before. On a number of occasions in the past several decades we have been led to believe that the challenge of containing the growth in health-care costs has been met. In the mid-1990s, it was the managed-care revolution. That was followed by the managed-care backlash, when the trend line for health-care costs headed back up.

The idea that we have licked the problem of health-care cost increases is no more probable today than it was in the past.

Our nation has made no fundamental change in how health care is paid for or delivered.

Congress has not passed sweeping legislation to contain health costs, although it did make inroads into moderating the growth in Medicare and health-insurance premiums through the Affordable Care Act (or Obamacare, as it is sometimes known). Increases in Medicare payments to insurance companies, hospitals and other health-care providers are getting trimmed. And the law is fostering a number of small-scale experiments around the country that are showing promise in delivering health care more efficiently. Big increases in insurance premiums for individuals and small businesses are now scrutinized by federal and state officials, and insurers are required to provide rebates if their administrative overhead and profits are too high.

Still, if claims that the health-cost problem has been reined in seem like wishful thinking, that’s because they mostly are.

For the past several months, analysts at the Kaiser Family Foundation and the Altarum Institute have been analyzing the recent slowdown in health spending. On average, health spending grew by 4.2 percent per year from 2008 to 2012, down from the recent peak of 8.8 percent from 2001 to 2003 and the lowest rate of growth in five decades. Our main conclusion is that most of this slowdown, 77 percent, has been due to years of a weak economy, which causes people to put off health services when they can and prompts employers and states to reduce health spending. The other 23 percent is explained by changes in the health system, including increased consumer cost-sharing, tighter managed care and modifications in payment and delivery (we can’t precisely pinpoint the separate effects of these three factors).

If the economy recovers as expected, the annual growth rate in health spending will increase by more than three percentage points over the next several years, to more than 7 percent, from the current low level of about 4 percent. This won’t happen immediately; we found that there is a lag before economic downturns and upturns affect health spending. Nor should this expected upward trend be interpreted as health costs again spiraling out of control — or, at least, no more or less so than they are now. And it won’t be because the Affordable Care Act is fueling an increase in health costs. It will simply be a byproduct of the recovering economy stimulating a return to more typical levels of health utilization and greater health spending.

But the slowdown has not all been due to the economy. If public- and private-sector efforts to contain health-care costs continue to take hold, and new efforts are instituted, we could potentially shave a percentage point off the annual increase and perhaps a little more — saving more than $2 trillion from the national health-care bill over a decade. This would translate into lower growth in Medicare and Medicaid spending and lower premium increases for people and employers. In fact, once the effect is removed of more people turning 65 as the baby-boomer generation ages, spending per person in Medicare is already expected to grow more slowly than private insurance costs over the next decade, and slightly slower than the growth in gross domestic product.

We need to be realistic about the fact that health spending will start going up more rapidly again as the economy improves. But how much costs escalate is at least in part within our control, and that matters a lot for federal and state budgets, employers and families. The place to start is by recognizing that the problem of health-care costs is far from solved.