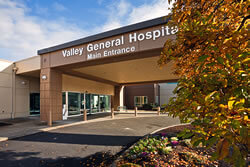 In 2010, Snohomish County Public Hospital District #2 entered into a 30-year lease agreement with Swedish, a Washington non-profit organization, to operate Stevens Hospital in Edmonds due to severe budgetary concerns. The partnership was the first of its kind in the state. Now, Valley General Hospital, a public hospital in Monroe, is also looking to lease the hospital to offset financial woes — this time to an out-of-state for-profit organization:

Taxpayer- supported Valley General Hospital is on the verge of approving a deal that would allow a for-profit health care organization to lease the hospital for 40 years.

Before that happens, the public will get a chance to hear a report by an outside consultant about the deal and ask questions about its findings during a meeting scheduled for 6 p.m. today at the hospital.

The report by Wipfli, a consulting firm of certified public accountants, is expected to be posted on the hospital’s website Tuesday.

If approved, the deal between the Monroe hospital and Franklin, Tenn.-based Capella Healthcare would mark the first time that organization has partnered with a public hospital, said Mike Liepman, Valley General’s chief executive.