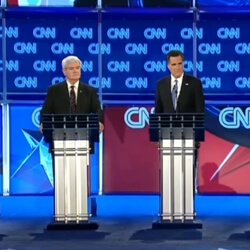 Admittedly, I have yet to watch one of the nineteen Republican primary debates in its entirety.  However, there was a clip from last night’s Florida debate that caught my attention — Mitt Romney defended the Massachusetts individual mandate against former Senator Rick Santorum’s criticism:

Rick Santorum assailed the front-runner during Thursday night’s debate for propagating a plan he says has led to more freeloading.

“What has happened in Massachusetts is that people are now paying the fine because health insurance is so expensive,” Santorum said. “Free ridership has gone up five-fold in Massachusetts. Five times the rate it was before.

The former Massachusetts governor jumped to the mandate’s defense, saying that “the idea of people getting something for free when they could afford to care for themselves is something that we decided in our state was not a good idea.”

But even though Romney argued that his plan was based in the idea of “personal responsibility,” he opposes such a rule at the national level, arguing that the decisions on how to manage and regulate health care should be left up the states. Romney has said that as president, he would repeal the national health care law that was modeled partially after his state’s plan.

In the wake and aftermath of the debate, there has been plenty of commentary on the former Massachusetts Governor’s health care plan, its effectiveness, and to what extent it’s comparable to the Affordable Care Act (see here, here, here and here).  But, what caught my attention was Santorum’s statement that Romney’s “mandate is no different than President Obama’s mandate.”  That’s essentially true, and it makes me wonder if, and to what extent, a Romney administration would fight federal health reform.