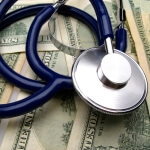 A few interesting tidbits from the report:

What are the reasons for the slow growth in health spending?  A lower rate of medical inflation for one – we’re used to hearing about how much medical inflation outpaces overall price growth, but lately that hasn’t been the case.

CMS attributes it to the recession and lower use of services.  Unemployment has definitely affected use of services – with 2010’s high rate of unemployment, employer health coverage decreased (contributing to a drop in private health insurance enrollment for the third year in a row), keeping many Americans out of the doctor’s office.