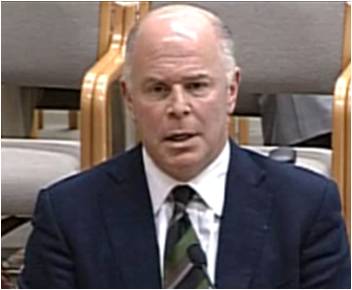 This week, the insurance exchange bill is taken up by both chambers.  The Senate Health and Long Term Care Committee heard SB 6178 on Monday, while the House Health and Wellness Committee takes up its bill on Thursday morning.

The bill itself is said to be modeled after a series of recommendations from the work of the Joint Select Committee on Health Reform Implementation.  However, in talking with some members and listening to the hearing on Monday, the bill appears to more appropriately be identified with the Office of the Insurance Commissioner.

In other words, given the complexity of the topic, it would be hard for the Legislature at this point to fully have their stamp on the bill.  Consequently, the bill would need to be driven by the administration.  But, even the HCA appears to be taking a secondary role to the OIC, as is the Governor’s policy office though to a lesser extent.

Barbara Flye, from the Insurance Commissioner’s office, outlined a broad argument for an activist and highly regulatory exchange

framework.  The basic problem, according to Flye is that “Carriers and consumers will act in their own self-interest if the rules of the game allow them to.”

“We need to build a marketplace that is different from today, in terms of competition.  Today competition is largely based on which carrier is best at avoiding risk, which one can cherry-pick the healthiest risk better than their competitors. And we need to change that marketplace dynamic so that carriers compete on price, quality and service, not on avoiding risk.”

To do that, Flye argued that if plans are allowed to provide individual or small group plans in Washington State on the open market, that they be required to provide a comparable product within the exchange.

Ms. Flye’s comments appeared to be more convinced than convincing, as she often spoke in absolute terms rather than with an eye to flexibility.  Senator Linda Parlette appeared to take some issue with the OIC’s role wanting to know with greater clarity what was required for the state to do in the bill under the ACA versus what was added in at the request of the Governor and Insurance Commissioner.

“It sounds like there’s a lot of policy in here that is coming from the OIC, and perhaps the governor’s office, that is not required by the Affordable Care Act.”

Molly Voris, lead staffer at the HCA on the exchange noted in response that the only thing the state was required to do in order to apply for addition federal funding early in 2012 was simply to empower an exchange board and let it get to work.  That is scheduled to take place on March 15, 2012, thanks to legislation adopted last year.

The most controversial elements of the bill are primarily found in Sections 4, 6 and 8.  From Section 4 of the bill:

“A carrier may not offer any individual health benefit plan outside the Washington health benefit exchange unless the carrier also offers a silver level and gold level individual qualified health plan through the exchange.”

In other words, to participate in the Washington State insurance marketplace, a plan must provide a gold or silver plan on the exchange, with only very limited exceptions.

There is not yet a definition of what constitutes as a “qualified health plan,” but leaves this to the Insurance Commissioner to adopt by rule, per section 6.

Section 8 removes constrictions on the board, which opponents say would grant broad policy setting powers to the exchange board. The members are appointed by the governor and otherwise unaccountable to the public.  Len Sorrin, Director of Congressional and Legislative Affairs at Premera, specifically cited this section as a problem for reform implementation.

“We believe that those sorts of broad based policy decisions about the health insurance market in Washington and how health care financing is delivered to the citizens of the state of Washington should continue to reside with the Legislature, which it always had.

This is perhaps the most important piece of health care legislation this session, and certainly one to keep an eye on closely as the session continues.