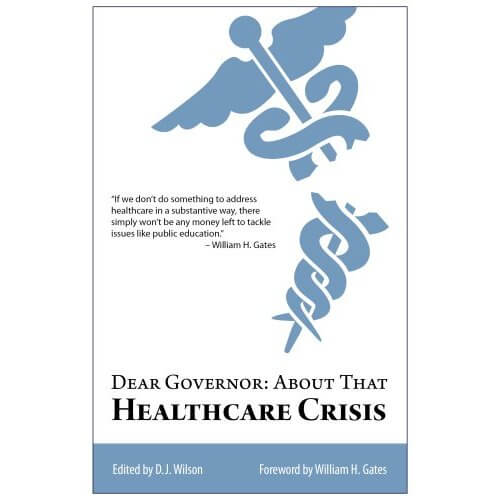 YOU HAVE 5 MINUTES WITH THE GOVERNOR ON HEALTH CARE. NOW GO.

Almost four years ago, I got the notion that it might be a good idea to capture the wisdom and insights from the health care sector and deliver it in a decidedly low-tech format to the winner of the 2008 gubernatorial election.  So, we put together a book titled “Dear Governor:  About That Health Care Crisis.”  If you attended last year’s conference, you received a copy as part of your registration fee.

With over 25 voices from across the health care spectrum – from doula to legislator, from medical group CEO to conservative blogger, senior center activist to pediatrician – including a Foreword by Bill Gates Sr., the book received praise from a diverse set of folks.

New York Times best seller, it wasn’t.  Sure, it takes more than two hands to count them, but the list of folks interested in health policy at the state level is relatively small.  However, legislator after legislator – and Governor Gregoire herself – cited the book as a “tremendously valuable resource” for a quick understanding of health care in Washington State.  Rep. Zack Hudgins went so far as to get a number of additional copies to forward to colleagues in legislatures in other states.

So, having learned how to do this once, we thought we’d do it again this year.  However, instead of a Dec 1st release date, this year, we’re looking at a June 1st release.

That means, we’ll need all submissions by March 1 – which is where you come in.

If you had 5 minutes with the next governor – or both candidates for that matter (we’ll be giving both campaigns as many copies as they’d like, after all) – what you would want to say?

Take up to 1000 words and put it down in writing.  First, though, send us a note and tell us you’re interested.  We’ll hold a place for you to ensure we review the content and consider it.  We’re limited only by space and balance.  So, we’re not going to have 25 health plan voices, for instance.  But, if you’re the only voice on workforce development, or the only one talking about pediatric behavioral health, then you’re probably among only a few voices we might tap.

There’s no gimmick here.  It’s straightforward:  if you want to share your voice, we’d love to hear it.  That is the fundamental mission of State of Reform – to broaden and deepen the conversation about moving our healthcare system forward.  So, send us your thoughts.  We’ll post it online here, and consider it for “Dear Governor:  It’s Still About Health Care.”

Why don’t you join the conversation?  In 2008, these are some that did: