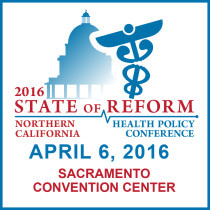 The State of Reform Health Policy Conference is focused on bridging the gap between health care policy and political reality. Too often, those with good ideas for reforming health care don’t have a solid understanding of how the legislative process works. Those who understand politics don’t always comprehend the intricacies of the health care system.

State of Reform pulls together practitioners, thought leaders, and policy makers – each working to improve our health care system in their own way – into a unified conversation in a single place.

Northern California State of Reform 2016 marks the second conference we’ve held in California. We’ve covered several hundreds of stories and worked to build relationships with leadership from carriers and providers as well as local and state agencies. We’ll daylight the unique issues California faces and how stakeholders are improving care while reducing costs.

With over 400 C-suite executives and policy-makers, you won’t find as diverse a health care audience elsewhere in the state.

Join the conversation with other health care executives and help shape reform April 6, 2016.