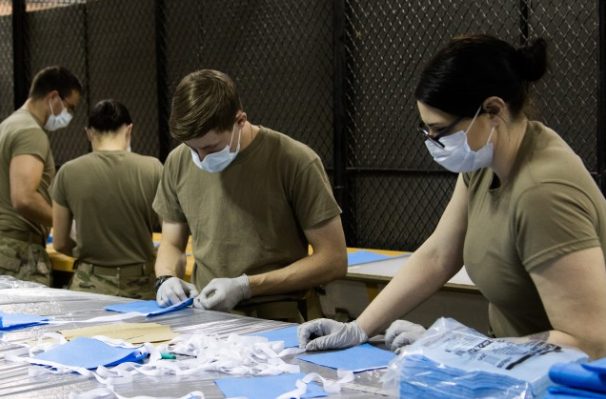 At a press conference on Feb. 9, Gov. Jay Inslee announced he would lift the outdoor mask mandate by Feb. 18.

The decision was prompted by a rapid decline in COVID-19 cases, as the omicron wave continues to break, which is projected to continue over the next several weeks. Inslee said hospitalizations remain higher today than at any point during the pandemic, and caution is still advised. However, the rapid decline in cases seen in Washington State, and other countries, impacted the decision.

“Omicron clearly has characteristics that will allow us to lift mitigation measures within the weeks to come, rather than months,” Inslee said.

More announcements will come next week, Inslee said. These could include further mask mandate reductions in March. Inslee said based on his understanding of the science, a transition period of lifting requirements was warranted. However, he said his decisions won’t be impacted by other political forces.

Inslee further said mask mandates in schools will be lifted soon. He spoke with Superintendent Chris Reykdal recently, who earlier this week said he was encouraging the Governor’s office to think about lifting school mandates. Removing mask mandates at a state level wouldn’t prohibit local health departments from issuing or retaining their own requirements.

Officials in both Oregon and California have announced sunset dates for mask requirements as well.

In Washington State, projections from UW’s Institute for Health Metrics and Evaluation estimate that the peak of daily deaths, which reached heights seen during the delta wave, has already passed. By late March, it anticipates deaths will return to levels seen last summer, and continue to decline.

Hospital resource use is also expected to continue to decline over the coming months, as will infections.

In a policy paper, the Institute said that the U.S. strategy to manage the epidemic should include three issues. These include preparing for new variants that may lead to immune escape, and prompt another surge. This should include maintaining surveillance, expanding production of antivirals, and promoting vaccinations.

Second, it recommends that as omicron subsides, schools, workplaces and communities should move to a more normal life.

“Nimble responses to future waves of the pandemic will benefit from not prolonging the transition out of the current phase,” the policy recommendation states.

Third, it states that there will likely be a winter surge of omicron or another variant later in 2022 as immunity wanes and hospitals will likely face a double surge of COVID and flu. Hospitals should plan accordingly now for that.