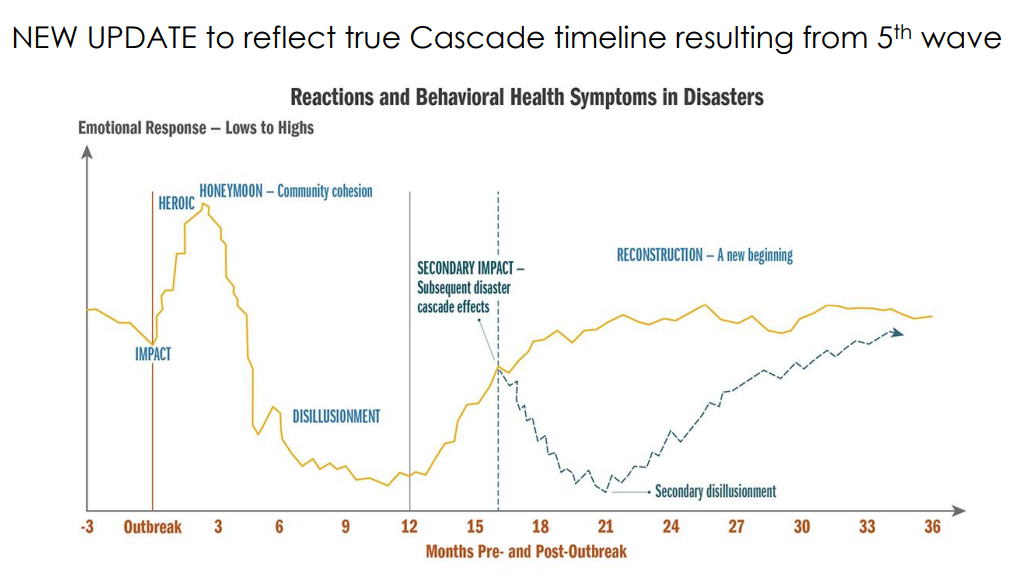 Mental and emotional pressures stemming from the pandemic have been building for young people, frontline workers, and educators as Washington State is trying to measure its impact.

Throughout the COVID-19 pandemic, the Washington State Department of Health’s Behavioral Health Strike Team has been charting the emotional response people have to a disaster. While communities often rally together early, as a disaster drags on, emotional and mental health take a significant hit before rebounding.

But if a secondary disaster hits, like a wildfire as seen this summer in eastern Washington or another major COVID wave as has been seen with the Delta variant, those emotional and mental gains can regress. The effect caused by compounding or cascading disasters has significant impacts, once again reducing mental wellbeing as can be seen in the chart below.

This second drop in mental wellbeing is seen especially among people who are struggling financially, among racial and cultural groups that have been disproportionately impacted by the pandemic, children and students, and health care workers. All these groups will likely experience a secondary drop in mental wellbeing, said Tona McGuire, co-lead of the Behavioral Health Strike Team.

In addition to material and health concerns, part of this likely comes from disappointed expectations. Earlier in the summer, there was optimism that the pandemic could end quickly, before the Delta variant caused a major fourth wave of infections and hospitalizations which filled medical facilities and stressed already overwhelmed staff.

Health care providers and other public-facing workers are struggling, especially “when you are having to treat patients in a way that you were not trained for,” McGuire said. The effects could compound as winter approaches, and mental strain mixes with seasonal affective disorder.

That disruption is also impacting the education system, both for students and staff. McGuire said they typically see a ‘summer slump’ in therapy referrals as kids finish with school and their stress load is reduced.

“We did not see that this summer, we have continued to see pressure on the behavioral health system,” McGuire said.

McGuire said there has been a surge in kids showing up to emergency departments for behavioral health issues. Parents are also anxious about their children attending schools, and having to balance work and child care with quarantine rules. Anecdotal evidence points to an increase in school anxiety among students, and increases in behaviors like acting out, withdrawal and aggression.

That was supported by Joseph Neigel, director of prevention services at Monroe School District, who presented at an Oct. 19 meeting of the state legislature’s House Children, Youth and Families Committee.

“The landscape for schools is dire, and our current reality is unsustainable,” Neigel said.

The pandemic has caused ‘exceptionally’ low morale in adults as they adjust to practices that aren’t common and feel like they could be doing more for their students. There has been an increase in the use of sick and personal leave days. Neigel said:

“These are all clear signs that our workforce still remains in the chasm of that disillusionment phase.”

His partners across the stare are reporting students are less focused, not prepared to learn, and have lost track of grade-appropriate behavior. McGuire said children are relearning how to be students, some of whom have essentially been gone from school for two academic years. The state is hoping to collect actual data on student experiences as they transition back into the classroom.

“We know how to do this,” Neigel said. “The multi-tiered systems approach, making data-based decision making, community investments in school-based behavioral health have led to really a comprehensive system of supports across our district.”

Seed funding has also allowed the district to pursue even further funding. Neigel said school districts need more funding for school-based mental health supports, and that the availability of trusted adults in schools is helping students.