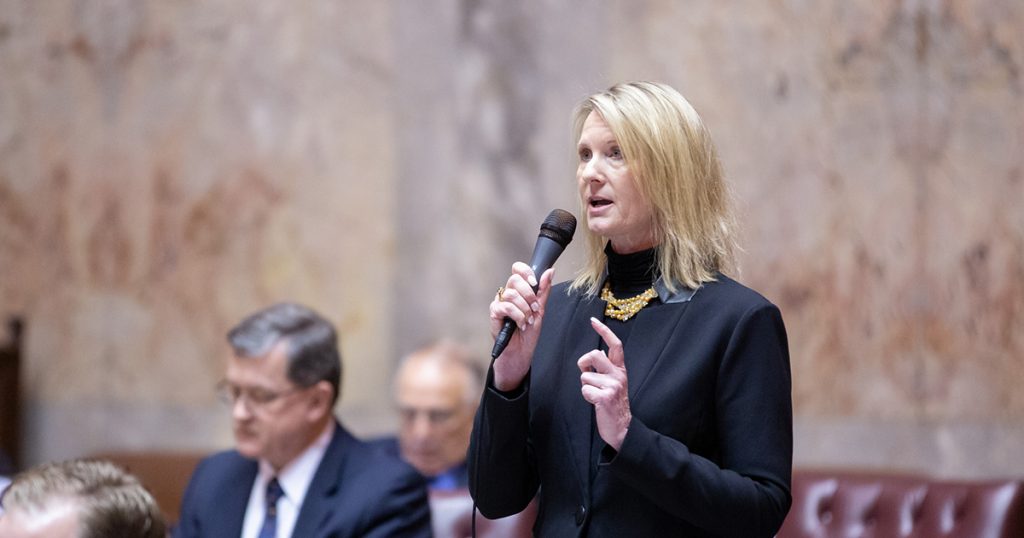 Sen. Patty Kuderer represents the 48th Legislative District and serves as Chair of the Senate Housing Stability & Affordability Committee. The Washington State Wire, State of Reform’s sister site, talked with Sen. Kuderer about what’s on her mind ahead of the 2022 session, including housing and rental relief bills, gun legislation and a housing court.

Aaron Kunkler: What have you been thinking about in terms of housing and evictions?

Sen. Patty Kuderer: “Foundationally, I can tell you that I view housing as an essential need. And so we look at housing differently than we look at other areas of the economy. At least I do and my committee does, and we have what I would say are three goals. We’re trying to implement protections where appropriate, and you saw a lot of that happened with the changes to the Residential Landlord-Tenant Act and the Mobile Home Landlord-Tenant Act. Then we look at preservation of existing tenancies whenever we can, wherever we can. That is through establishing the permanent emergency rental assistance programs that you saw happen this last year, and also the establishment of the mediation process that was in my bill, SB 5160. That applies to not just people who are behind in rent, that program also applies to behavioral issues as well to try and work things out and get to a good solution for both the tenant and the landlord, and to preserve that tenancy whenever we can. The last goal that we have is production. Right now in terms of inventory, it’s estimated that we’re anywhere from 225,000 to 350,000 units behind in terms of development for the needs that we have. And we’re also looking at an expected population increase here in the state of Washington. I’ve seen numbers that have ranged from another million here by 2030, to upwards of two to 3 million. So we know that a large percentage of the increase in our population will be west of the mountains. We’re landlocked, so we have to get creative in terms of how we look at increasing production. And that saw some builds already around increasing density and in traditionally transit-oriented areas, and then expanding that out, as we look at zoning issues and things like that. One of the things that was clear from this last year, that we don’t have that would be very, very helpful, is [a] housing registry. And that would allow us to actually have a point-in-time count of rental units that are available to renters, in a given area at any given time. We don’t have that information right now. And I think that that would be very, very useful and helpful. Not just in terms of knowing what we need to build and being able to have a public-private partnership in terms of building those additional units, but also I think it would have helped tremendously with outreach, especially to the small mom-and-pops [landlords]. Now I’ve been told that we estimate this is true, both from commerce and from the landlord lobby, that we have about 50% of our rental units owned by small mom-and-pops which are defined right now, roughly as about four units or less. We created a program this last year where we put $2 million away just for small mom-and-pops, but we actually increased that to six units or less. Plus, it would be helpful to reach them directly with information on the emergency rental assistance program that we’ve now established the permanent funding source for, and how that’s going to work. Also, it would help with information on the other programs. We have the landlord mitigation program and the tenancy preservation program that we have set up through [the Department of Commerce] as well. I was talking to a small mom-and-pop owner [and] she and her husband owned three units and she had no idea. And those units, by the way, are managed by a large property management company. She has no idea that we had any programs set up specifically for a small mom and pop, I think that is a serious, serious problem. Because in an emergency situation where it could mean, essentially, you’re on the street during a pandemic, or you’re not, I think being able to get information out to people about resources that are available to help is critically important. So I think you’ll see a bill to establish a housing registry next year as well.”

AK: How would that work, and which agency would implement and oversee it?

PK: “I think that it would be set up through Commerce. I think there might be a nominal fee to have the registry here, but the idea is that it would serve as a conduit for information for land owners. So there would be a benefit to that registry. Seattle has registered right now, and we would simply take that statewide so that we know what we’re dealing with, in terms of how many rental units, [which] we estimate [to be] about 1.1 million in the state. Another bill that might be coming forward next year is potentially a fix of SB 5160. Relating to that is the bill that also established the right to counsel statewide. And we expect that protection to be very, very helpful in terms of saving tenancies. But there’s been some question as to whether or not that program will be available in every county, which is what we at the legislature — I know as the prime sponsor of that legislation — … absolutely intended to [make] mandatory that every county has a mediation program established. And I did use the word “shall” in the bill. We also included funding for dispute resolution centers that will be in charge of this mediation program through the courts.”

AK: What other bills should we expect to see next session, or what are your top priorities?

PK: “We’re taking a look at some condominium issues in light of the collapse in Florida, and that might go through Law and Justice, as opposed to my Housing Committee. There are discussions underway in terms of making the inspection schedule uniform. Right now, that is done on a city-by-city basis. The issue with any kind of uniformity at the state level is that the cities don’t all have the same amount of resources. So unless that comes with additional funding for cities for at least assistance with expertise, either Commerce, or some other state agency, it really is something that you have to carefully consider. So that you don’t put cities into a position of having to do something that they don’t have sufficient manpower or funding to do.”

AK: What are your top priorities in general looking ahead to the 2022 legislative session?

PK: “Housing is definitely one. Housing affordability as well as production of new housing is definitely on my list of priorities. Also add to that gun safety measures. After the open carry ban that passed last year, I had several cities reach out to me, both during the legislative process, and I’ve spoken to many since the session has ended. There’s an interest amongst cities to have the ability for them to implement the same kind of ban, should they choose to do that. So I’m looking at crafting a bill that would give them the permissive authority to ban open carry at their city council meetings, and at city buildings [when] they felt that was appropriate. I’m also looking at the backlog in the courts. This is a serious problem, our courts have been underfunded in the past. I think part of the reason why the courts are thinking they may not want to stand up the mediation program is again, they’re thinking that it’s too much for them because they have a lot on their plate already, and they don’t have enough resources, aside from the fact that we didn’t fund that particular program and that’s now becoming more abundantly clear to the courts. I don’t think that was fully appreciated initially. But we have a backlog due to COVID, and there’s a cost to that backlog to the taxpayers that is not readily apparent. I think in order to clear out that backlog I have a bill that would make a simple change and bring us more in line with the rest of the states in terms of when prejudgment. …I’m [also] in the very beginning stages of talking with the courts about the creation of a housing court. They have that in New York, I believe. And I believe San Francisco may have a similar program. It would be along those lines. I think that housing is such a critical need that it shouldn’t be something that is left to be one of the last things that gets on the courts docket. So by creating a housing court, you would see expedited handling of those matters … We are examining what other cities and, quite frankly, what other countries have done in terms of how they handle housing issues in court, and what it would look like for Washington State.