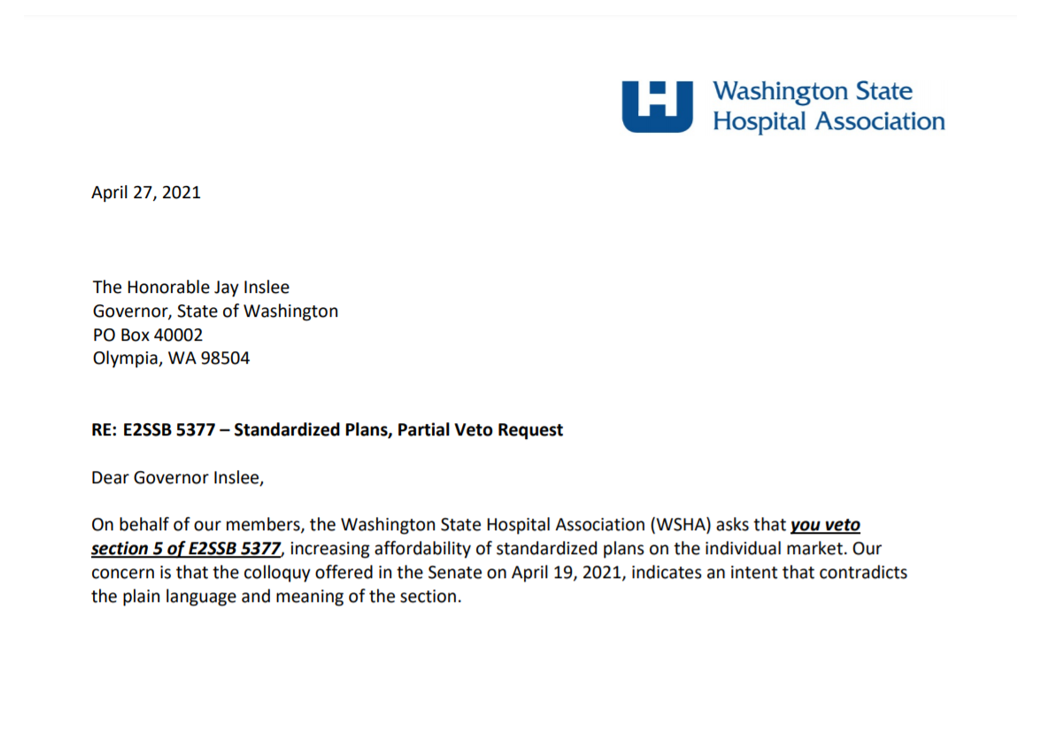 In a letter sent to Governor Jay Inslee’s office on Tuesday evening, the Washington State Hospital Association called on the governor to veto a portion of recently passed legislation that would require certain hospitals to contract with at least one public option plan in the state.

The bill, SB 5377, includes a broad range of new provisions aimed at increasing the affordability of standardized plans on the individual market. Specifically, the bill establishes a state premium assistance program for certain individuals purchasing health insurance on the state exchange. The bill also directs public option plans to submit cost and quality data to the Health Care Authority.

Section 5 of the bill, which WSHA is calling on Inslee to veto, puts in place public option participation requirements. If a public option plan is not available in each county during plan year 2022 or later, the section states that hospitals that receive payment from Medicaid or a public/school employee benefits program must contract, if they receive an offer, with at least one public option plan to provide in-network services to enrollees of the plan. The final bill report adds:

“HCA must also contract with one or more carriers to provide public option plans in every county of the state or in each county within a region of the state.”

The legislation passed out of the House on a 55-43 vote at the beginning of April, and then passed in the Senate by a vote of 28-21 on April 19.

WSHA’s letter states there is a discrepancy in the language used in the final bill and the colloquy offered in the Senate on April 19. The association says it is concerned that the colloquy “indicates an intent that contradicts the plain language and meaning of the section.”

The final bill on Inslee’s desk has the correct language, requiring hospitals to contract with “at least one” public option plan, but the letter states:

“The uncertainty created by the disconnect between the legislative language and the legislative intent expressed in the Senate colloquy leads us to respectfully request that you veto Section 5 of the bill. Your veto will remove this uncertainty and still maintain hospitals commitment to contract with at least one public option plan in each county.”

In a conversation on Tuesday afternoon, Sen. David Frockt, who sponsored the Senate legislation, said he is “fairly livid” about WSHA’s veto request. He said the bill has undergone major changes since it was first introduced at the start of session and he thought it was in a place that hospitals could accept.

“It’s really unfortunate because this has been a torturous negotiation to get it to this point and we have moved many miles towards the hospitals’ position to get them to something that I thought they could live with. And now suddenly they’re trying to blow it up.”

Currently, just 19 of Washington’s 39 counties have public option plans. A key challenge, says Frockt, is that some health plans have had a difficult time getting major hospital systems into their networks.

“If the plans can’t form networks, then you can’t have a plan offered in that county. It’s that simple.”

WSHA’s letter states that hospitals have expressed their commitment to ensure that public option plans are available across the state and they are committed to contracting with at least one public option plan in each county.

Frockt says he doesn’t think hospitals will participate unless they are forced to.

“I’m very frustrated because the bottom line in my mind is that if the governor were to veto this section, he is likely ensuring that the public option will not take root throughout the state because there will be no incentive for hospitals to participate. They won’t do it. They keep saying they’re going to do it and then they go and lobby against it.”

He adds that a veto to section 5 would be “tantamount to throwing in the towel and saying we’re not even going to try.”

When reached out to for comment, WSHA told State of Reform:

“Our request for section 5 to be vetoed is not because we don’t want to participate in public option plans, but is in response to language included in the colloquy statement that deviates from the final negotiated bill language and introduces uncertainty about legislative intent.

To understand WSHA’s request for section 5 to be vetoed from the bill, it is important to first understand our position throughout session. If all hospitals are to be legislatively mandated to participate in public option plans, then they should only be required to contract with at least one health plan. We expressed our position throughout the session to the bill sponsors…

…We were very surprised by the colloquy language after the House and the Senate’s concurrence on the bill. We accepted the negotiated agreement that was amended on the House floor. We did not plan to ask for a veto until the colloquy offered in the Senate. As you can see our letter is solely focused on this piece and not on the underlying policy of the final legislation.

The Senate colloquy says hospitals must contract with any public option health plan that makes an offer to a hospital. Contrary to the plain language and meaning of section 5, the colloquy creates a record of legislative intent that contradicts the legislative language. Legislative intent is important if there was a lawsuit brought on this topic. Frankly, we do not understand why this was raised on the Senate floor and what it aimed to achieve, other than uncertainty.

This disconnect creates uncertainty if any health plan questions whether a hospital should contract with them or not. To veto section 5 merely removes this uncertainty, it does not change hospitals’ commitment to participate in public option plans next year or in subsequent years.”