How hard is it to get a COVID test if asymptomatic? Turns out, it varies

Despite expanded testing recommendations and the CDC’s guidance on testing asymptomatic individuals, evidence suggests rising consumer demand for COVID-19 tests and a shortage of supplies are making it difficult to offer timely, widespread testing.

I decided to put Washington to the test to see how difficult it is to get tested if I was asymptomatic but had been in close contact with someone who had tested positive.

A google search for “COVID testing centers in King County” shows multiple locations offering testing in the area, but several had a warning that tests were limited to certain patients. 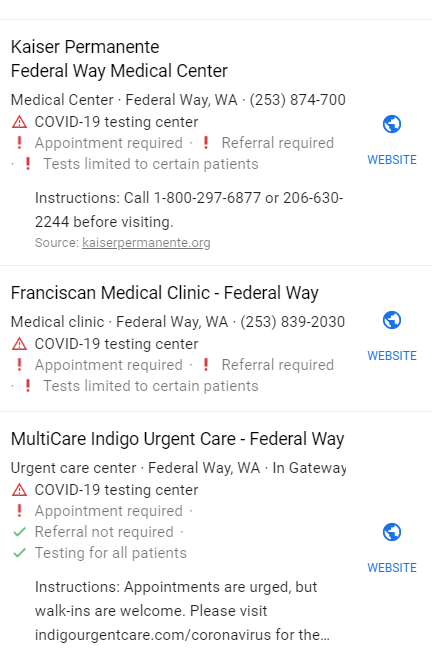 The same could be found in similar searches for other cities and counties in the state.

I called a sampling of testing locations – some with the “tests limited to certain patients” warning and some without — to see if I could make an appointment. I found wide variation in the series of calls I made:

“This is a challenge because these southern states are creating a huge demand on these commercial labs…But we need help from the federal government. I’ve said this now for four or five months. We need the federal government to use the Defense Production Act to increase the production of reagents and other materials that are necessary to be able to run these tests. And we have concern about that, that the reagents could run short and potentially affect our in-state lab producers,” said Inslee.

“We need to have a very rapid turnaround time so that our contact tracing can be successful and we need national leadership to help in that regard.”