A new audit report released by the Office of the Washington State Auditor reveals why noncompliance rates for student immunizations remain high for some school districts. 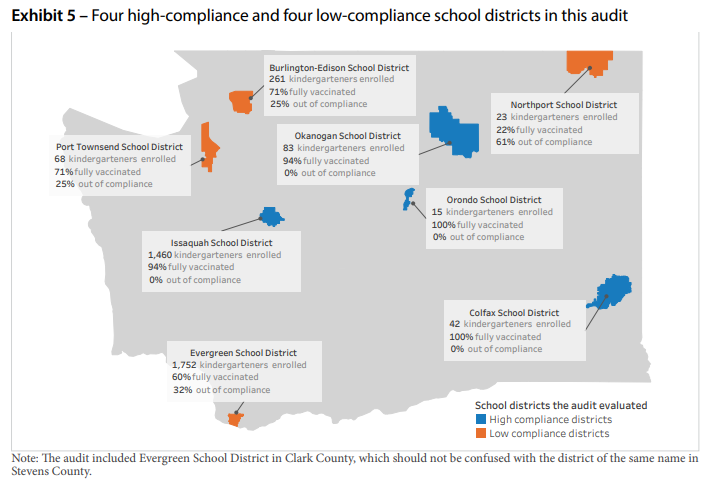 Washington State law requires school officials to collect documentation proving immunization or exemption from families before their child can attend school. This documentation is used to determine whether a student is considered compliant with state law. Should proof not be provided for a child, schools are required to exclude them from attending school.

As to why noncompliance rates are high for some districts, the audit points to instances of incomplete or inaccurate data reportage.

29 [school districts] did not report or reported having no kindergarten students. Student enrollment data from the Office of Superintendent of Public Instruction shows that the majority of these districts do in fact have kindergartners enrolled. Although we did not look into the reasons why these districts have either not reported the data or reported apparently contradictory information, incomplete data impedes the state’s ability to fully understand the completeness of its vaccination efforts.”

Among the schools that did report complete data, around 8 percent of kindergartners were out of compliance.

In addition to issues with data reportage, the audit indicates that some principals chose not to exclude out-of-compliance students from school, despite state law requiring them to do so.  Exclusion from school is mandatory if parents do not provide documentation of their child’s immunization status on or before the first day of school.

School principals in the four districts with low compliance rates chose not to exclude students.

According to the audit, district and school staff offered several reasons for not excluding students who are out-of-compliance, including concerns over parents taking their children out of school, undue burdens on school staff, and the potential reduction of school funding.

State laws governing school vaccinations in Washington were enacted to achieve a level of protection against disease known as “herd immunity.” The CDC defines herd immunity as a “situation in which a sufficient proportion of a population is immune to an infectious disease (through vaccination and/or prior illness) to make its spread from person to person unlikely.”

To reach herd immunity, public health officials in Washington set a goal to reach 95 percent vaccination coverage, a level at which outbreaks become easier prevent. DOH figures show only 85 percent of kindergartners have documentation to prove they have completed the full schedule of doses for the 11 vaccine preventable diseases.

In response to the outbreaks, the state passed a bill which removed the personal belief exemption from vaccinations for measles, mumps and rubella.

To increase compliance rates, the audit suggests first and foremost that schools inform parents that exclusion is a legal requirement.

Principals that were prepared to exclude students who did not submit all required vaccination or exemption documents achieved higher compliance – and higher vaccination rates – than those that did not. Of the eight districts we evaluated, those that communicated about compliance requirements as a matter of law had better compliance rates.”

Additionally, the audit recommends that school districts use multiple methods to tell parents about immunization requirements. This includes assigning staff to consistently monitor vaccination records and using tools that are accommodating for bilingual and bicultural differences among families.