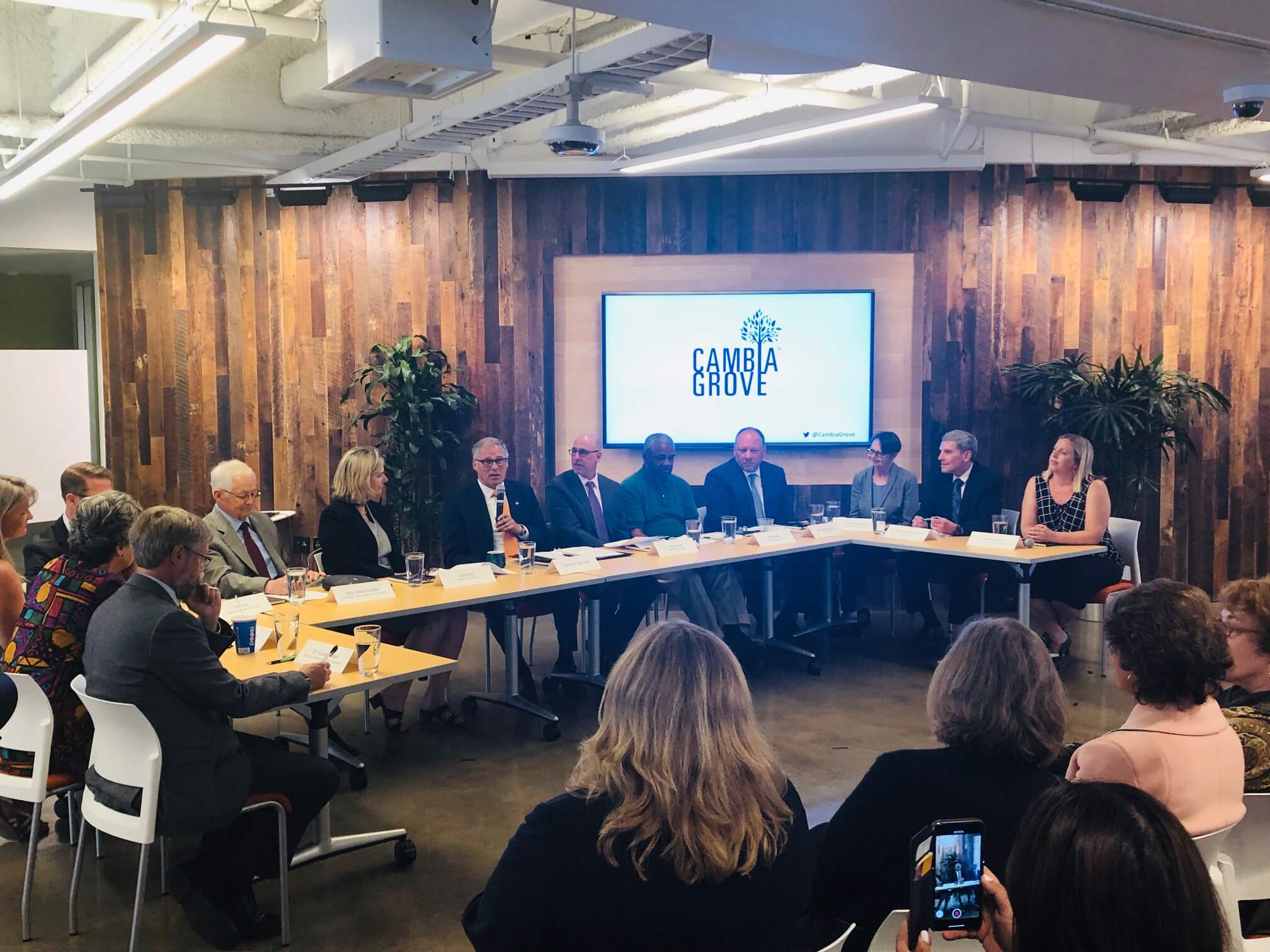 On Wednesday afternoon, Gov. Jay Inslee was joined by a group of legislators, patients, and state health leaders to discuss the roll-out of the Legislature’s recently passed public option bill.

The conversation, held at Cambia Grove, brought a diverse group of voices to the table to discuss next steps in the development of Washington’s public option, key issues and questions that will need to be addressed when creating the plan, and what the overarching goals for the public option are.

Larry Levitt, Senior Vice President for Health Reform at the Kaiser Family Foundation, also participated and brought a national perspective to the kick-off.

During the conversation, the panelists agreed that one of the top goals for instituting a public option is to improve affordability and address underlying health care costs. These have been primary goals for this effort since Gov. Inslee introduced the proposal in January.

“One way of dealing with the high price of health care is to give more people access to public programs like Medicare or Medicaid through a buy-in. And, I think Washington’s approach is intriguing. It’s sort of a hybrid of using the contracting leverage of the state through a private insurance plan to nudge prices downward,” said Levitt.

Another goal is to improve access to care in all parts of the state. This is especially important in some Washington counties where there is only one insurance plan available.

“It also provides a backstop. You know, Washington, similar to many parts of the country, had a problem with potential counties with no insurers at all. Having that publicly-sponsored plan acts as a backstop protecting against that problem of people have no access to insurance whatsoever,” added Levitt.

Another primary topic of conversation among the panelists was the benefit design of the Cascade Care plan.

“I think our public option proposal that we have now and are in the process of implementing, it certainly is going to be challenging, but I’m very pleased that we have issuers that are showing an interest,” said Commissioner Kreidler. “Now the real task: can we put together the product that’s going to have the broad appeal, and also start to make the kind of driving changes that we want to see — which means improving quality, lowering cost, and being able to do it in an efficient fashion.”

Pam MacEwan didn’t give specifics when asked about specific insurers who have expressed interest in participating in Cascade Care.

While the legislation creating the public option underwent several changes on its trip through the Legislature, one aspect of the plan had broad agreement.

“The standard benefit design was something that people all agreed with,” said MacEwan. “I think it will make a huge difference for consumers in the sense that they’ll understand what’s covered, they can compare plans, but also we’ll be able to design them so that more services are covered before the deductible. And, we can also emphasize the kind of care that has the most value.”

Having a standard benefit design for Cascade Care plans also lends itself to improving health inequities across the state.

“What Cascade Care offers us is an opportunity to provide equitable care for everybody, which is important to me,” said Sims. “I grew up in a period of time when equitable care was not given to us based upon race. It’s just a fact and an argument maybe that has changed, but not when you go out and talk to a lot of people of color… And so I think we have an incredible opportunity to set what I call ‘a new and higher standard.’ That no matter who you are, no matter what you look like, no matter whether you’re in Omak or Pullman or Ellensburg or Seattle, that you are going to get equitable care. And I think Cascade Care has the ability to do that.”

Washington as a model:

As the first state in the nation to approve the development of a public option, several of the panelists discussed how Washington will be a model for other states and the federal government to look to. Levitt referred to Washington as a “laboratory” and an opportunity to answer important questions about implementation and design.

Gov. Inslee has talked about Washington’s public option on the presidential campaign trail, and looking forward, he stressed the importance of remaining bold and innovative at Wednesday’s meeting.

“We will be under the microscope by the nation in this new way of moving forward. And I just think that’s something for us to be aware of. And I think in response to that we should not be cautious or conservative; we should be bold, and experimental, and energetic because this does give us an opportunity to do that – both on value and integration and all of the other things we’ve talked about… We have a chance to be first, and when you’re first, by nature, you’ve got to be innovative in my view.”

The majority of details remain unknown as the Health Care Authority and the Exchange work to develop these plans and implement this first-of-its-kind legislation.

Levitt pointed to some of the big questions that will need to be evaluated as the public option plan is rolled out:

MacEwan says Cascade Care won’t be available until 2021, but that the plans will likely be up in the Exchange’s system for the public to see in late October of 2020.