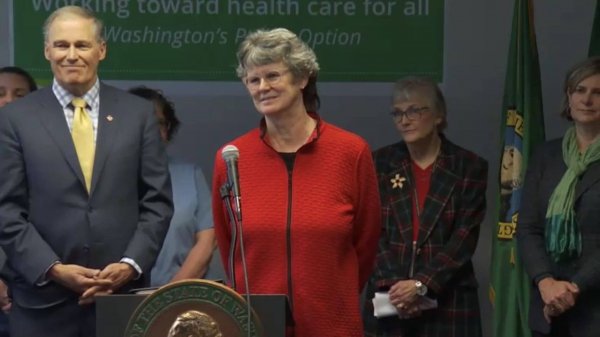 At a press conference today, Washington Governor Jay Inslee announced a proposal to provide a public option for health insurance in every Washington county.

“Under the Obama administration and the Affordable Care Act, Washington was able to make tremendous progress in expanding coverage and start bringing down costs in our health care system,” Inslee said. “Under the Trump administration, all that progress is at risk. Because of the instability they’ve brought to the system, consumers in 14 counties have only one option for coverage and our ability to rein in costs has been stymied… This public option will ensure consumers in every part of the state will have an option for high-quality, affordable coverage.”

King County Executive Dow Constantine and Insurance Commissioner Mike Kreidler shared their comments of support at the press conference, along with three legislators: Rep. Eileen Cody, who chairs the House Health Care & Wellness Committee, and Sens. David Frockt and Karen Keiser, who will both sit on the Senate Health & Long Term Care committee next session.

Cody and Frockt plan to introduce the bill that would set up a public option during the 2019 session.

The standard plans would have “consistent and transparent deductibles, co-pays, and co-insurance, and offer the same services before the deductible.” Reimbursement for providers would be capped at Medicare rates.

Sen. Frockt, who referred to the public option as “Cascade Care” in his comments, emphasized the need to “lay the foundation for the universal system” while the Trump Administration “has put both a national and state based system out of reach.”

“Cascade Care will lend predictability by establishing standard benefit designs that will be easier for consumers to understand and navigate by providing transparent and predictable cost sharing.”

The plan would require the Health Benefit Exchange to provide premium subsidies for people who need financial assistance, with the goal being that “consumers spend no more than 10 percent of their income on premiums.”

Rep. Cody said that $500,000 of the Governor’s budget would go toward setting up the program and getting bids from carriers, but “the state, at this point, is not going to be offering the subsidies.”

Rather, Cody said, they’re studying how much it would cost to provide such subsidies.

“Where we’re seeing the biggest drop-off in the Exchange is the 300 to 500 percent of poverty, where there’s no subsidies,” Cody said.

Following the passage of the Affordable Care Act, Washington’s uninsured rate declined by 60 percent, and 800,000 Washingtonians gained coverage through the ACA.

“I think this is actually a very simple idea,” Cody said. “We know we have more people to cover … This is the step that we can take to make sure that we are offering our citizens a plan that looks like Medicare.”