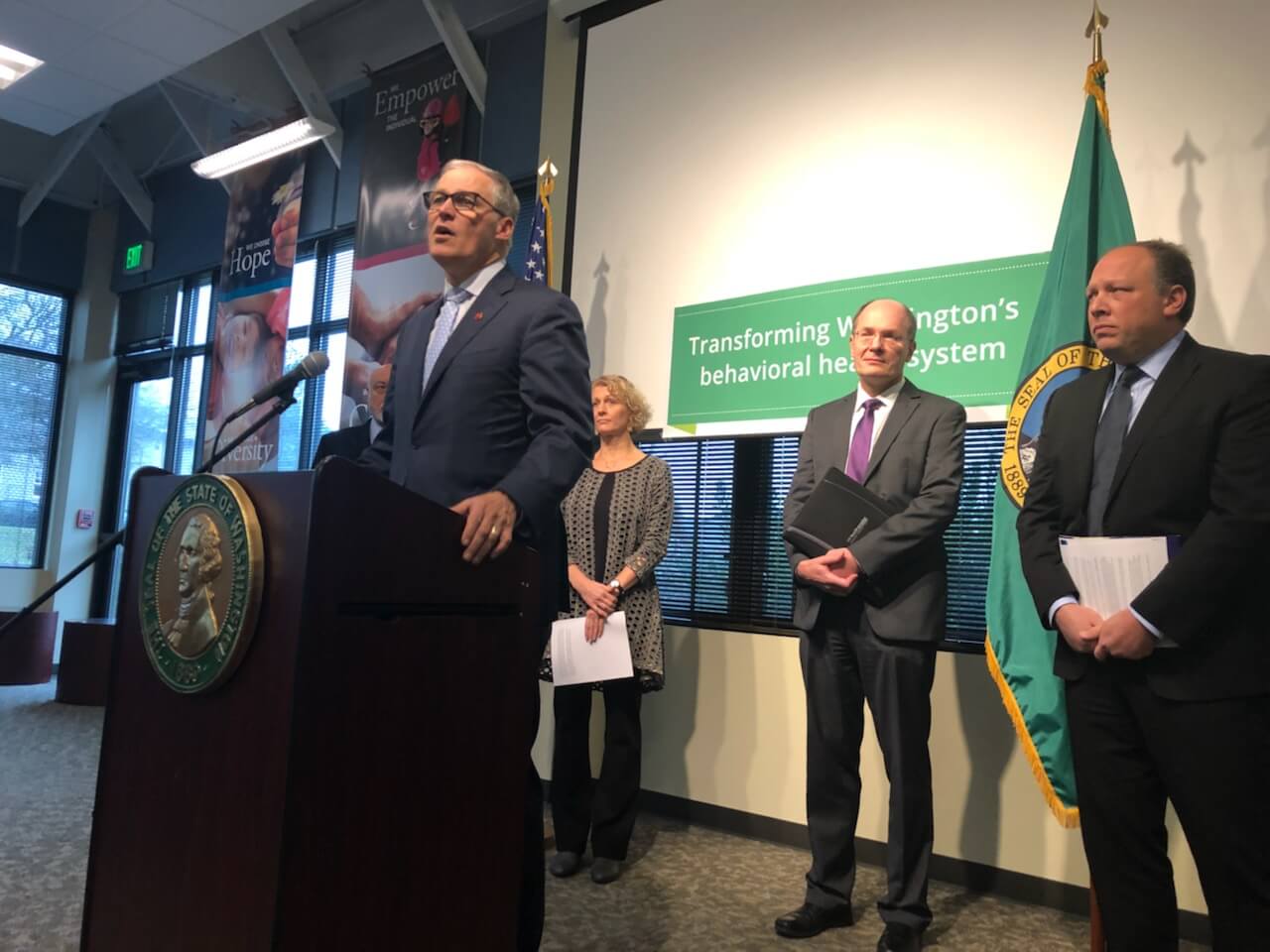 Washington Governor Jay Inslee formally announced a $675 million plan today that aims to guide a transformation of Washington’s behavioral health system as part of his 2019-2021 budget.

The investments follow up on a five-year plan Inslee announced earlier this year to “modernize and transform the state’s mental health system.” Under today’s plan, funding will go toward several efforts to improve the system, including:

“We know how to fix this problem,” Inslee said at the press conference where he announced the plan. “We just need a little bit of will, a little creativity, and a little funding.”

A major aspect of Inslee’s five-year plan was to move civil patients out of state hospitals and into community settings across the state over time, a transition he originally proposed in his 2017-19 budget proposal. Eastern and Western state hospitals, in the future, would serve only forensic patients — patients who are involved in the criminal justice system — and high-needs civil patients.

According to the policy brief on the new plan, Western state hospital, which lost its federal certification in June, had a waitlist of 71 people waiting to be admitted in November 2018, and 189 people on a waitlist to discharge.

In the five-year behavioral health plan, Inslee’s preliminary goal was to establish about a dozen 16-bed community hospitals for civil patients across the state (which would amount to, presumably, just under 200 beds total). His proposal for 2019-21 would start planning for many more beds, predesigning and designing four 16-bed and two 48-bed facilities, as well as predesigning three 150-bed facilities (for a total of over 600 beds, by our math).

Alongside the planned, new facilities, investments in the expansion of current community providers’ capacity alone are “projected to add more than 500 beds statewide” for civilly admitted patients. An additional $30 million+ will be invested in expanding community services to include more options for care (the policy brief gives long-term care facilities as an example) to ease transition after people are discharged and divert more people from inpatient care. 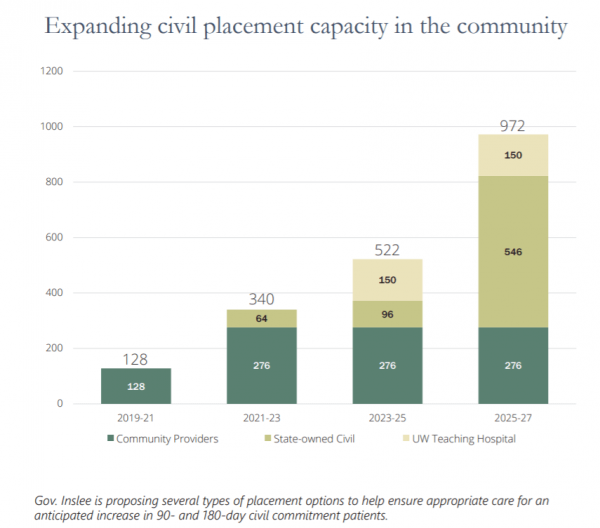 The aforementioned projects are in addition to a $2 million predesign for a collaborative teaching hospital at the UW that, according to the above graph from the policy brief, looks to add 150 beds for civil patients. The partnership with UW would also help to address the shortage of behavior-health workers in the state.

“We are ready to work with the governor and with our state and our legislators to roll up our sleeves and really see what we can do as a state to improve care for Washingtonians with mental health and substance abuse problem,” Dr. Jürgen Unützer, Chair in the Department of Psychiatry and Behavioral Sciences at UW, said at the press conference.

Other efforts to expand the workforce in the governor’s budget include funding for training advanced behavioral home care aides and conditional scholarships for students who commit to working in state hospitals and state community sites.

As for Western and Eastern State hospitals, Inslee’s capital budget includes “nearly $56 million” to improve the facilities and $47 million for constructing two new wards and a “modern treatment space” at Western.

Part of a long-term plan is to construct a new, 500-bed forensic hospital. In the next biennium, $7.5 million will go toward conducting a predesign for the project.

“Inslee’s plan turns the state hospitals into Forensic Centers of Excellence for forensic patients, and moves civil commitment patients into the community by supporting and building additional beds at a combination of smaller state-run and private facilities,” according to the governor’s press release.

At the press conference, which was held at Navos Mental Health and Wellness Center in Burien, three legislators joined Inslee at the podium: Senators David Frockt and Manka Dhingra and House Speaker Frank Chopp.

In a statement released after Inslee’s announcement, Sen. Frockt, who will serve on the newly formed Behavioral Health Subcommittee next session, said there’s “much to like” in the governor’s plan — and highlighted two items in particular.

“I particularly like the proposal to employ the University of Washington to expand our state’s field of providers,” Frockt said. “I also wholeheartedly support the proposed investment in permanent supportive housing as a proven way to provide people with both housing and services.”

The governor is proposing $20 million in capital funding to the Housing Trust Fund for permanent, supportive housing for people with chronic mental illnesses, as well as allocating about $35 million for rental assistance for an estimated “1,000 vulnerable people,” with patients being discharged from state hospitals taking priority.

Speaker Chopp recently named mental health as a top priority going into his last session as Speaker. When we asked if this package is what he was hoping to see, he called it “a step in the direction.”

“We’ve been coaxing it along,” Chopp said. “And it’s nice to see it getting broader support.” He was also happy to see the governor’s proposal include not just mental health, but substance use.

During the press conference, Inslee mentioned efforts to address substance-use disorder treatment frequently. In the policy brief, though, there’s one sentence that mentions that funding:

“In addition to expanding mental health treatment options, the governor makes investments in substance use disorder treatment by increasing provider rates for secure withdrawal management and stabilization facilities across the state,” according to the brief.