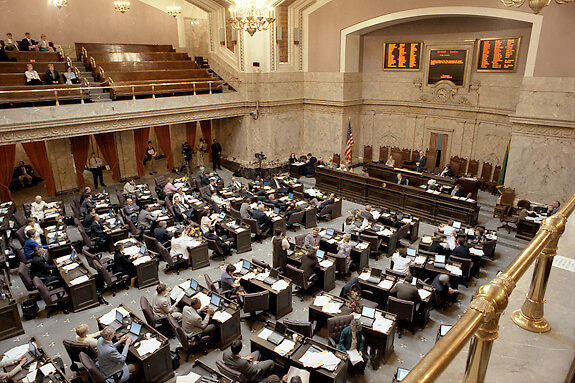 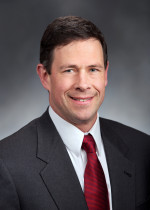 Engrossed Senate Bill (ESB) 6089, coupled with bare bones Exchange funding in the Senate budget proposal, stands to cripple the Washington Health Benefit Exchange. Introduced by Senator Andy Hill (R-45), the bill aims to alter the Exchange’s funding stream, to a point that the Exchange leadership believes would threaten its continued existence. ESB 6089 has moved rapidly through the Senate after being introduced on March 31st, passing just two days later along a party line vote.

Taken together, the legislation represents the most aggressive attack on a state-based exchange by any legislature in the country to date, with the exception of Cover Oregon.  However, Cover Oregon was never a functional Exchange.  The Washington Health Benefit Exchange has enrolled the third most members of any exchange in the country.

“[The Senate Budget] provides a lower $85.9 million budget for the Exchange that threatens the viability of Washington Healthplanfinder and has considerable impacts to our customers, insurance companies and the long-term success of the Exchange,” said Exchange Board Chair Ron Sims in a prepared statement. 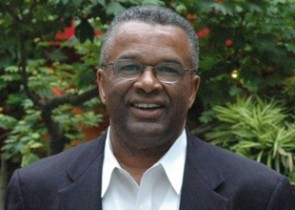 Sims goes on to explain the Board’s “significant concerns” which go beyond mere budget cuts. First, the legislation would bar the Exchange from receiving any of the two percent state tax revenue on health plans, which currently helps fund its operations. Instead those monies would be directed into the state general fund. Second, the Exchange would also be prohibited from seeking reimbursements for the outreach and services it provides to more than 1.8 million Medicaid customers, according to Sims.

“Even if the federal government makes funds available, we couldn’t use those funds,” said Exchange Board member Don Conant in an April 4th Policy Committee meeting. “What could possibly be the reason for that? This seems unreasonable, almost capricious.”

The Senate bill has received push back due to the limitations it places on Exchange funding itself, but very few have commented on its inherent contradictions to the Senate’s own budget proposal. 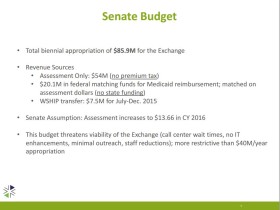 Ultimately, ESB 6089 would institute an overall limit on the amount of revenue the Exchange can raise while authorizing funding that would actually exceed those same limitations.

The legislation would make the following changes:

Removing the premium tax would make the Exchange largely dependent upon the carrier assessment for revenue.

According to Ways & Means Committee staff, the carrier assessment would need to increase roughly 400 percent in order to make up for the lost revenue. The current assessment is $4.19 per member per month (pmpm).

The following excerpt from ESB 6089 could create significant conflicts within the Exchange’s finances because it authorizes more funding than the Exchange can actually raise:

Beginning in calendar year 2016 the assessment may not exceed three and one-half percent of plan premium and may not generate greater income than authorized by the legislature  in the omnibus appropriations act.

Funds from the premium tax and carrier assessment are deposited into the Health Benefit Exchange (HBE) account. Additional operating funds for the Exchange can come from Medicaid, federal grants and the state’s general fund. Under the Senate budget, the HBE account is allocated just under $54 million for the biennium, $23.3 million in the first fiscal year (FY 2016) and $30.6 million in the second (FY 2017). Per the above section of ESB 6089, the Exchange would not be able to generate any income above those amounts.

The 3.5 percent cap on the carrier assessment would result in $13.69 pmpm assessment (based off an average premium of $391). This is not far from the Exchange’s guidance last week of a  $13.66 pmpm placeholder assessment rate for calendar year 2016, which is based on the assumption that the cap in ESB 6089 would be in effect.

Coupled with other funds provided, a $13.66 pmpm assessment would exceed the Senate budget’s appropriated limitations. In fiscal year 2016, starting July 1, 2015, the Exchange account would receive funds from:

For clarification, insurers file products with carrier assessment for calendar year operations.  The legislature appropriates on a fiscal year model running from July 1 to June 30.

This totals $40.6 million, all of which will be deposited into the HBE account.  However, this amount is almost double the fiscal year 2016 appropriation for that account in the Senate budget of $23.3 million. Even if the Exchange collected all of these funds, it could only draw down funds within appropriated amounts.

In fiscal year 2017, the HBE account would be completely dependent upon the carrier assessment. Assuming the $13.66 pmpm assessment, $39.7 million would go into the account, almost $10 million over the Senate’s fiscal year 2017 limit.

In total, the Exchange could receive up to $80.3 million in revenue for the 2015-17 biennium. But in reality the Exchange would not be able to raise more for the HBE account than it is allocated, which is $54 million in the Senate budget proposal.

This would have a crippling effect on an Exchange budgeted for operations totally $127 million for the 2015-2017 biennium.

ESB 6089 is sending the Exchange very mixed signals, explicitly placing a cap on the assessment that is out of sync with the Senate’s own budget proposal. It is also incompatible with the House proposal. The House budget allocates $124 million for the exchange, nearly $40 million more than the Senate. It also keeps premium tax revenue with the Exchange and places no limit on its ability to raise revenue.

It is safe to assume that the final budget will fall somewhere in between the Senate and House proposals. However, ESB 6089 creates significant conflict with the Senate budget proposal, which assumes the passage of the bill. Any anticipated compromise would still have to grapple with this bill’s restrictions, should it pass.

ESB 6089 has passed the Senate but has not been scheduled for a hearing in the House.