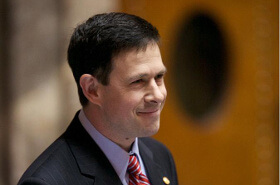 UPDATE: This post has been updated to reflect amended language implemented when SB 6089 passed the Senate early Friday morning.

On Tuesday Senator Andy Hill (R-45) introduced SB 6089, which would bring significant changes to the Washington Health Benefit Exchange. The bill was given a hearing the same day, was voted out of Ways & Means on Wednesday, and now awaits a floor vote in the Senate.

SB 6089 would make two major changes to how the Washington Exchange operates and how it is funded:

End premium aggregation: The bill would codify a December decision of the Exchange Board of Directors that premium invoicing would be delegated to insurance carriers. While the Board’s decision will be effective October 1st of this year, the legislation has an emergency clause which could make it effective immediately after the Governor signs it into law, should it get that far. This would put the Exchange, as well as insurance carriers, on a significantly accelerated timeline to make this transition.

The Exchange, as well as many carriers, have expressed concerns over this bill, believing this will result in a significant increase of cost to consumers while threatening the viability of the health insurance marketplace. Testimony cited that this bill coupled with a limited budget proposal in the Senate, would push the Exchange to rely too heavily on carrier assessments in order to maintain operations. Committee staff testimony stated that the carrier assessment would increase to about $16 per member per month–an almost 400 percent increase–by 2017. This is would be much higher than the 72 percent increase in assessments recently proposed by the Exchange, or even the 200 percent increase necessary to make up for the $26 million shortfall.

Despite these concerns, the bill is on the fast track, already passing the Senate on a party-line vote.

UPDATE: In an attempt to address these concerns, Senator Randi Becker introduced an amendment on the Senate floor that attempts to soften the blow to the Exchange and carriers. The amendment pushes back the transfer of the premium tax to next year, restricts any immediate increase to carrier assessments and capping any increases in 2016 to no more than 3.5 percent. It also authorizes a one-time transfer of $7.5 million from the Washington State Health Insurance Pool to the state Exchange account. Carriers remain opposed to the bill, however.