A divided board at the Washington Health Benefit Exchange voted earlier this month to abandon premium aggregation and allow carriers to handle payments. The vote, four to three, means Healthplanfinder will soon eliminate billing and payment features from its website. But, it’s still unclear what affect this will have on consumers, premiums, and the success of the Exchange’s mission.

The change will take several months, and the Exchange likely won’t relinquish complete control until the next open enrollment period in Oct. 2015. Customers can already pay carriers directly, but proponents of the motion hope this will solve some of the issues affecting thousands of customers.

The motion was passed just moments after a third party presented a risk analysis which shows removing payments is actually riskier than the Exchange retaining premium aggregation. Board members said they needed to act now, and act they did. 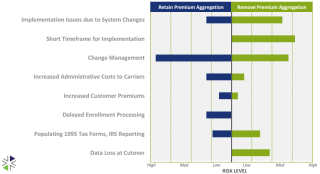 A risk analysis performed by Cambria Inc. for the Exchange regarding premium aggregation. Source

Board member Teresa Mosqueda, a vocal opponent of the change, says she thinks the move is premature. “While I absolutely agree that we have to get these issues fixed, just eliminating premium aggregation isn’t going to solve the problem when we have these outstanding enrollment files that are incorrect,” said Mosqueda. Non-voting members Insurance Commissioner Mike Kreidler and Health Care Authority Administrator Dorothy Teeter agree.

CEO of the Exchange, Richard Onizuka, said in an email that they are continuing with the changes and working closely with Deloitte to develop a plan moving forward.