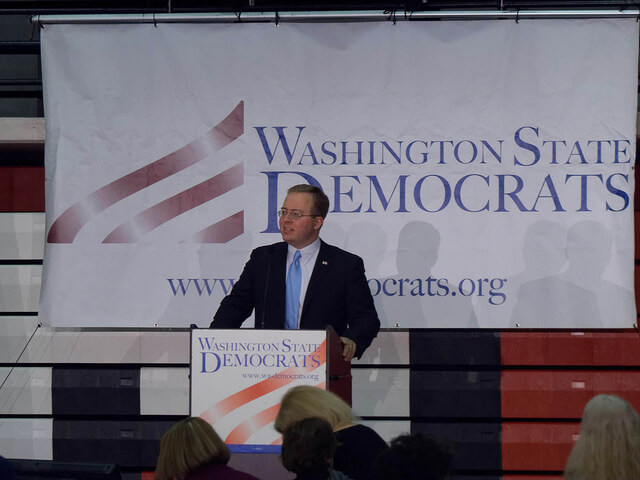 With no statewide races on the ballot this year, voter turnout was low in Washington; near 31%. The big news this year, beyond major ballot measures regarding gun background check and education, is control of the State Legislature.

Republicans already control the Senate, but Democrats, who control the House of Representatives yielded some ground.

Republicans are expected to pick up a number of seats in the House, but not enough to gain control, after several key incumbent Democrats trail behind.

In the 25th Legislative District, incumbent Democrat Dawn Morrell, an RN for Multicare Good Samaritan Hospital in Puyallup, trails behind her opponent by approximately 5%. Melanie Stambaugh, the Republican challenger is 24 years old, and would become the youngest legislator in the State of Washington. 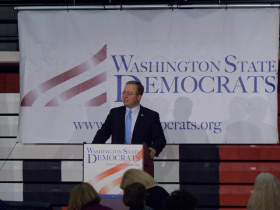 Schlicher at a Democratic rally in 2013. (Photo courtesy of Ronald Woan (CC))

Rep. Morrell is Chair of the Appropriations Subcommittee on Health & Human Services and a member of the Health Care & Wellness committee. She’s also sponsored many bills that impact health care including bills that regulate Midwifery practices and prescription medications.

Another close race in the 26th Legislative District shows Republican Jesse Young leading former State Senator and Democrat Nathan Schlicher by approximately 5%. Schilcher, an ER Doctor and attorney, lost a seat in the Senate to Jan Angel after a special election, now he’s seeking to fill Angel’s vacant seat in the House.

Both tell a tale of woe for Democrats in Washington as state Republicans mirror their national counterparts in gaining ground.

For Federal Congressional elections all incumbents retained their seats. A close race between two Republicans east of the Cascades has former NFL player Clint Didier trailing behind Dan Newhouse by 3%.

What does this all mean for Washington and health care?

Neither the House nor the Senate will switch control, in Washington. Things will likely be business as usual for the next two years. Only the next Legislative session will give us insight into what to expect.