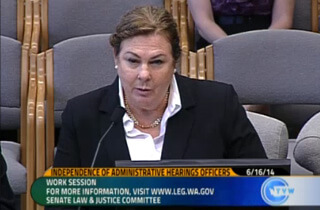 Judge Petersen Testifies on Judicial Independence and the OIC

Judge Patricia Petersen testified on judicial independence and the OIC on Monday. Testifying at the Washington State Senate Law & Justice Committee’s Work Group on Judicial Independence, Judge Petersen’s testimony illuminated the issue of whether the executive branch should have the power to both judge and enforce regulations, rather than rely on the judicial branch. The work session was held by Senator Mike Padden, Chair; Senator Steve O’Ban, Vice Chair; Senator Adam Kline, Ranking Member; and Sen. Jeannie Darneille.

As currently codified, the Washington State Insurance Commissioner can rule on appeals directly or appoint a designee. For the past twenty years, this designee was Judge Patricia Petersen (with the exception of a Premera case where the OIC ruled on the appeal directly). This naturally raises questions of judicial independence as a Judge Petersen is an employee of the OIC while handling appeals to OIC rulings.

Tim Parker, a lawyer at Carney, Badley, Spellman, described a client reacting to this conflict of interest: “If I get a speeding ticket in Washington State, is the police officer going to be the judge?”

You can watch highlight testimonies below:

Serving as Chief Presiding Officer for the past 20 years at the Office of the Insurance Commissioner, Judge Patricia Petersen was unable to speak about the details of her ex parte allegations. However, she delivered criticism of the Office of the Insurance Commissioner (OIC) in regard to judicial independence. The OIC being able to deliver ad-hoc rulings on appeals by aggrieved parties.

Simply put, the OIC is both the de-facto regulation enforcer and judge regarding insurance within the executive branch, rather than maintaining judicial checks and balances.

Lending unique insight both as Judge Petersen’s lawyer and as a former Washington State Senator and Justice, Phil Talmadge helped draft the Administrative Procedures Act 1986-1987 as well as form the Office of Administrative Hearings. He described the impetus at the time to allow fair process for the appellant as DSHS was allowing fair hearings in name alone, acting as both judge and enforcer.

The most concise in clarifying why this was an issue of checks and balances, Tim Parker’s fiery testimony closed the meeting. Parker agreed that Policy needs to be determined by the Agency. However, he argued that ad-hoc policy should not be determined during appeals while the OIC’s conflict of interest exists. He reinforced the health care industry’s skepticism in the OIC’s appeals process. He also cited a specific case where an Insurance Commission reversed a Presiding Officer’s Decision to conform with the original reason that was appealled.