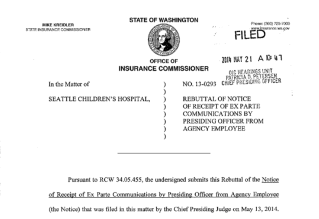 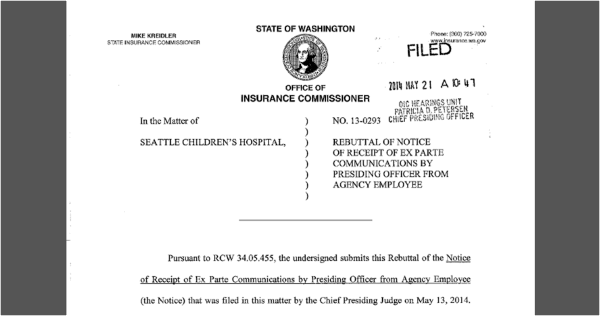 A few folks have asked me what the big deal is about the claims at the OIC that the Chief Deputy was allegedly trying to influence the legal determinations of the Chief Presiding Officer.

“Aren’t all of the OIC decisions politically motivated?  Kreidler is an elected official, after all.”

That may be an increasing perception of the agency, but it’s not supposed to be that way.

Like the US Supreme Court, which has sometimes been viewed as a political body – increasingly since Bush v. Gore in 2000 – regulatory decisions made by the OIC are more likely to be accepted if the agency is viewed as an impartial arbiter of the law.

It’s that perception of impartiality – and ultimately the trust in and future acceptance of OIC decisions – that is called into question by these claims.

After reviewing the legal filings of claims made by OIC Chief Presiding Officer Patricia Petersen, and the response from the Office of the Insurance Commissioner, we thought we’d distill it down to the essence for you.

Patricia Petersen is a 28-year OIC employee who for the last 19 years has served as the Chief Presiding Officer at the OIC.  Her job is, in part, to hear appeals of OIC regulatory decisions and determine whether those decisions are within the authority of the OIC under statute and administrative law.

As such, she is an employee of the OIC herself, reporting to the Chief Deputy Commissioner, Jim Odiorne.

Petersen claims Odiorne “repeatedly attempted to discuss the significant issue (network adequacy) and impose his opinions and influence my decisions.”

You can read her complete filing here.

She said this began in September, 2013, during the case with Coordinated Care and the OIC’s rejection of their application to be on the Exchange.  She said the last such attempt to influence her came in April, 2014.

A presiding officer may not communicate, directly or indirectly, regarding any issue in the proceeding…with any person employed by the agency without notice and opportunity for all to participate.”

When Ms. Petersen’s oral explanation of the law to Mr. Odiorne was not enough to end the attempts to “influence” Ms. Petersen, she produced written memos which clearly outlined the law.

Those memos are included in the legal materials.

The OIC rebuttal affirms that the series of communications between Petersen and Odiorne took place.

The rebuttal also appears to affirm that Odiorne was trying to influence the decisions of Petersen in the cases in question.  The OIC cites Nash v Bowen which affirms that an administrative law judge (ALJ), like Petersen, is able to decide cases only under the authority of the Secretary of HHS.  In this case, the Secretary would be exchanged with the Commissioner.

“An ALJ is a creature of statute and, as such, is subordinate to the (Commissioner) in matters of policy and interpretation of law.”

The rebuttal also argues that:

2.  The law only disallows other agency employees who are involved in “investigative or prosecutorial functions” related to the case.  The rebuttal says Odiorne was involved in neither of these functions, so therefore not disallowed from commenting to an employee about how the case should be decided.

After reviewing the materials, tthe OIC rebuttal included two odd items.  They didn’t seem to add value.  Rather they seemed potentially to undermine the OIC’s argument.

First, an email from Odiorne to Petersen.

As I read your order denying OIC’ Motion to Dismiss, the tone of footnote 4 seemed harsh, caustic, un-judicious.  Is that the impression we want to give the public in our orders?  Jim

It strikes me that commenting on the tone of a footnote, particularly the fourth footnote and in the absence of any comment about the writing of the decision on the Motion itself, is weird.

Second, the OIC filing included a 2012 performance evaluation of Petersen signed by the former Chief Deputy Mike Watson.  It was uniformly positive of Ms. Petersen, including the line that: 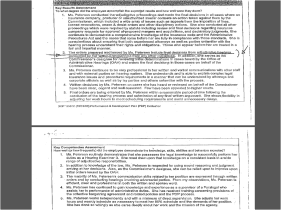 Written decisions by Ms. Petersen on cases she has heard or reviewed on behalf of the Commissioner have been clear, cogent and well-reasoned.  Few have been appealed to higher courts.

The inclusion of these two documents by the OIC were striking in their oddity.

I assume they were included to help demonstrate that Petersen is an employee of the OIC, and therefore within the purview of Odiorne’s authority to supervise.

However, the fact she is an employee is not in dispute.  It doesn’t take releasing a performance evaluation to make the point.