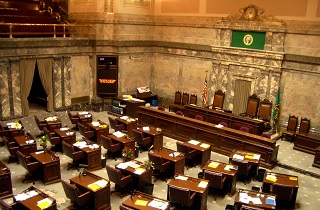 Just two weeks into the 2014 legislative session, the Washington Health Benefit Exchange staff is already tracking dozens of bills in the state legislature.

Exchange Policy Director Molly Voris and Senior Policy Analyst Joan Altman appeared before the exchange board on Jan. 23 to review several bills that would have an impact on the exchange and its operations if signed into law.

“We’re probably tracking somewhere between 25 and 35 bills right now,” Altman told the board.

One bill of interest to the exchange and its board is HB 2340, which would transform the exchange from a public-private partnership into a stand-alone state agency.

HB 2340 would maintain the exchange’s current funding mechanism and the board. But it would increase government oversight by requiring the exchange to follow the same rules that apply to any other state agency, including the same public disclosure rules. The bill would also require that the director be appointed by the governor rather than by the exchange board.

After Altman’s review of the legislation, board member Doug Conrad said he thought the exchange’s public-private partnership model “has worked rather well,” and he asked Altman what concerns the bill is trying to address.

“I think the idea of having a director accountable to the governor is the main part of it,” Altman replied.

Board Chair Margaret Stanley asked if the Governor’s office has expressed an opinion on the legislation.

“The Governor’s office, when we spoke with them about the bill, did not take a position,” Altman responded.

Cody first announced her intention to introduce the legislation during the closing keynote panel at the State of Reform conference in Seattle on Jan. 8.

She elaborated on her remarks in an interview with Valerie Bauman of the Puget Sound Business Journal.

At the board meeting, Altman also reviewed several other bills the exchange is tracking:

–          HB 2467, which would allow pediatric dental benefits to be offered in the exchange as either a stand-alone product or within a qualified health plan (Rep. Jinkins)

The board also approved a motion that it may decide to take a position on some of the bills that are under consideration in the legislature. The motion stipulated that exchange staff will provide an impact statement that lists the pros and cons of a particular bill, including its operational, financial and policy implications for the exchange. The board will then have a discussion about the impact statement and decide whether to take a position on the bill. Teresa Mosqueda was the only board member who voted against the motion.