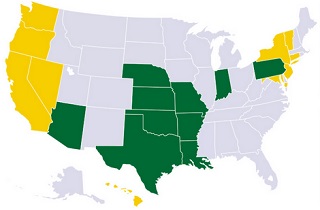 Americans United for Life, the influential pro-life legal team based in Washington D.C., has released its annual rankings of the 50 states based on the strength of their anti-abortion laws and overall actions on abortion-related issues.

For the 5th year in a row, Louisiana topped AUL’s “Life List” as the state that has done the most to “protect life in law,” followed by Oklahoma, Arkansas, Arizona, Pennsylvania, and Texas.

Also for the 5th year in a row, Washington was ranked “as the worst state for life for failing to protect women from an unmonitored and under-regulated abortion industry, followed by California, Vermont, New York, and Connecticut.”

“As the legal architects who, since the days immediately following the deadly Roe decision, have championed the strategy of using expertly crafted model legislation to protect life, AUL has tracked states’ progress toward achieving a nation in which everyone is welcomed in life and protected in law,” noted AUL President and CEO Dr. Charmaine Yoest. “Real pro-life momentum is reshaping the country as legislators craft protections for both mother and child, the victims of an avaricious abortion industry. Common-sense pro-life legislation saves lives and has broad public support in light of what we’re learning about the health risks of abortion for women.”

Americans for Life United (AUL) included its list of criteria for evaluating each state’s performance, which is graded on a scale of 100 total possible points. AUL’s grading system is based mainly upon state implementation of the components of the AUL’s Women Protection Project, such as prohibiting late-term abortion, abortion clinic regulation, parental involvement for minors, and providing women with “medically accurate information” beforehand.

AUL did claim one victory in Washington state in 2013. Its report noted that AUL testified against the Reproductive Parity Act, which would have required health insurance plans that cover maternity care to also cover abortions. The bill, H.B. 1044, passed in the Democrat-controlled House but died in the Senate due to Republican opposition.

Additionally, AUL released its list of “Women’s Protection All-Stars” aimed at “honoring states that have so far done the best in enacting protections for both mothers and unborn children.” This ranking is awarded to states based on the enactment of protective legislation highlighted in AUL’s Women’s Protection Project. This year’s All-Stars include: Texas, Missouri, Alabama, Arizona, and Arkansas.