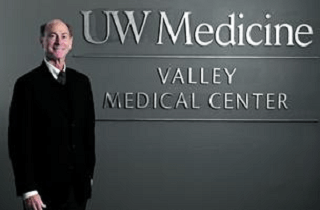 The appointee-controlled board of Valley Medical Center in Renton is set to decide today whether Washington’s highest-paid public hospital executive will keep his salary of over a million dollars for at least another two years after controversy over his ever-increasing pay.

Even if the board of trustees votes down the extension to Chief Executive Officer Rich Roodman’s contract, he will still walk away a wealthy man. Records show that Roodman has amassed a retirement package worth at least $7.5 million.

Roodman, 65, has been Valley Medical Center’s CEO for more than 30 years.

In a recent Seattle Times article, their records show that the proposed contract extension would freeze Roodman’s current base salary at $769,000 and continue to offer him more than $238,000 in annual incentives. Additionally, it would halt the hospital’s contributions to Roodman’s supplemental retirement plans, as well as “stop paying him “retention” payments that have garnered him more than $235,000 annually in recent years.”

Members of the board of trustees’ compensation committee negotiated the proposal with Roodman and his lawyers over the past month, according to an email send by President Lisa Jensen to fellow trustees and hospital staff on Friday.

Valley Medical Center’s operations were overseen by King County Public Hospital District until 2011, when it merged with UW Medicine.