“We’re pleased to see a consistent drumbeat of enrollment through Washington Healthplanfinder,” said Richard Onizuka, CEO for the Washington Health Benefit Exchange. “With nearly one month behind us, we have made significant progress toward covering thousands of additional families in our state.”

While call center volumes have decreased slightly since last week, the Exchange plans to add 145 new customer support representatives to the toll-free Customer Support line over the next six to eight weeks to alleviate longer than projected wait times. This will nearly double the current number of staff members.

“We continue to see strong numbers for Washington Apple Health enrollment with 2,000 and 3,000 new clients every weekday,” said Dorothy Teeter, Director of the Health Care Authority. “The majority of signups are coming from the newly eligible adult population – exactly what the Affordable Care Act intended. Enrollment trends also remain strong for children and other currently eligible individuals, which is great news in a state that has placed a priority on covering all kids.”

Updated numbers since the Oct. 1 launch include: 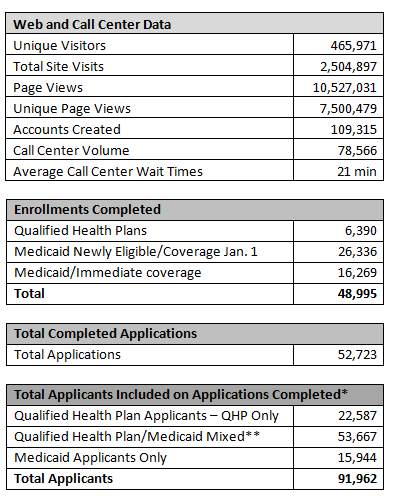 *Note: These numbers reflect enrollments and applications through Friday, Oct. 25 while previous reports include weekend data. Some applicants may be included in enrollment numbers. Applications completed includes individuals who have completed applications but have not yet submitted payment. Payment is due on Dec. 23, 2013 for coverage that begins on Jan. 1, 2014.