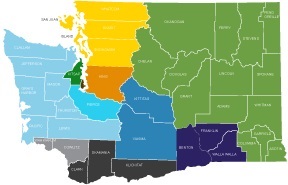 WA: Only Four Carriers Approved for Individual Exchange by OIC

The OIC has approved four carriers for the Exchange: Bridgespan, Group Health, LifeWise and Premera.  The charts provided below include premium rates for non-tobacco users in King County, and approved plans by county and metal level.  Moda , Kaiser, Community Health Plan of Washington, Coordinated Care and Molina were all not approved for the Individual Exchange.  The OIC has been given until August 6th to consider the SHOP application by Kaiser.

The following statement was released today by the OIC: 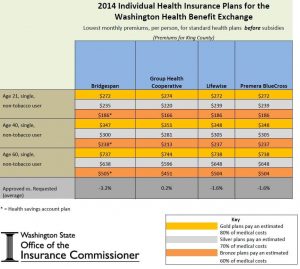 The approved rates are 1.8 percent lower than what the companies originally requested, resulting in a savings of more than $10 million.

“We’re now one step closer to giving Washington consumers access to affordable health insurance,” said Insurance Commissioner Mike Kreidler. “Many of the companies will look the same, but they’re going to sell all new plans with much better benefits.”

The following list includes the approved companies and the counties where they intend to sell: 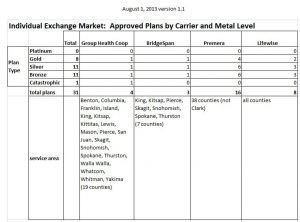 The board of the Washington Health Benefit Exchange will now review the approved Exchange plans to determine if they meet their Qualified Health Plan standards. A final announcement is expected at the Aug. 21 board meeting.

All of the approved plans include the 10 essential health benefits such as prescription drug coverage and maternity coverage. Also, annual out-of-pocket costs including deductibles and copays are capped at $6,350 for an individual and $12,700 for a family.

How much someone pays will depend on their age, where they live, whether or not they smoke, and which plan they select. Premium and cost-sharing subsidies are available for plans sold through the Washington Healthplanfinder, depending on your income.

Only Kaiser applied to sell small employer plans inside the Exchange and only in Clark and Cowlitz counties. The Exchange has granted Kreidler an extension to Aug. 6 to complete his review.

“Unfortunately not all of the insurers who applied were approved,” said Kreidler. “Several of them struggled to guarantee access to certain providers and hospitals. It’s our duty to make sure that if you buy a health plan, you can actually see the doctor or hospital that provides the service you need. This was a challenge for some of the insurers new to the commercial market. We’re committed to working with these companies to help them get ready for 2015. Getting to this point has been challenging, but the end result will be worth it. For too long, people have struggled to find affordable coverage. If they have insurance, they’ve continued to pay more, yet seen their benefits dwindle. The new plans for sale starting this October provide meaningful coverage and will give people peace of mind and financial security.”