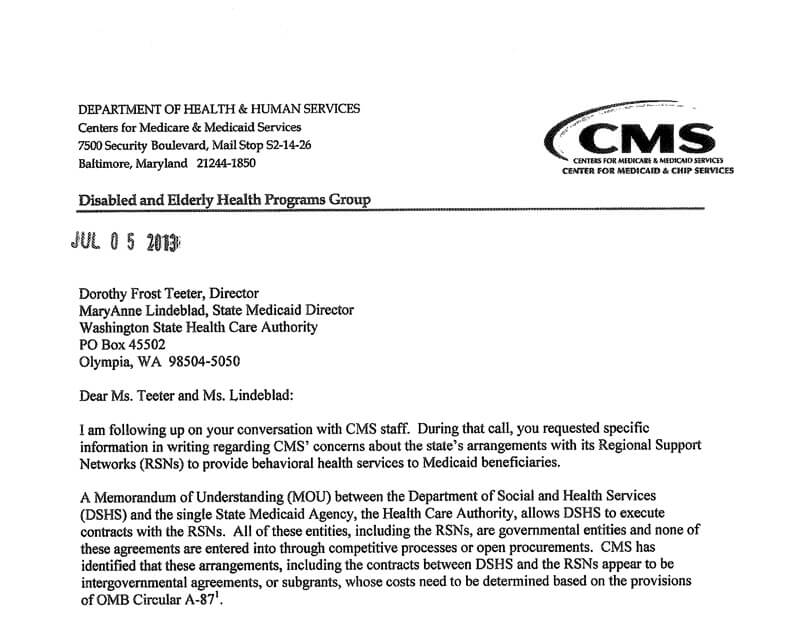 In a letter to Health Care Authority Administrator Dorothy Teeter, CMS informed the state of Washington that its current mental health system “cannot be considered validly procured” and therefore an invalid system.

The CMS letter goes on to demand a “corrective action plan” no later than 90 days.

In Washington State, funding for mental health comes from the state, which receives partial matching funds from Medicaid. To receive those funds, the state enters into a contract with the federal government.

There are a number of restrictions on those funds and how they are spent, but the general bottom line is that those funds must be spent on services (with appropriate administrative overhead).

In Washington State, the way funds get spent are often through a procurement process. Such a process must be open and competitive, as well as adhere to a series of other rules according to both federal and state statute.

The state mental health system is generally decentralized. This means that DSHS takes the mix of state and federal funds and sends them to regional support networks (RSNs) across the state. These RSNs are in many cases closely aligned with or actually part of county governments.

Any extra funds above cost, as determined according to CMS defined “allowable costs”, are kept – under the current contract – by the contractor.

And therein are the two central problems of the Washington State mental health system which, according to a July 5th letter from CMS, violates federal law: a lack of openness in the procurement process and payments under those contracts which are not based on cost.

“CMS has determined, based on the information currently available, that the arrangements between DSHS and all but one of the eleven RSNs have not historically been openly procured, because the RSNs are given the right of first refusal to provide behavioral health services which means that there is no open procurement to the extent that the RSN makes that election.

Therefore, when the RSN has made the election, the arrangements cannot be considered validly procured contracts.

“The CMS has identified two options for the state in this circumstance:

1. Make these arrangements into validly procured contracts by openly procuring behavioural health servicese and making the RSNs compete on the same basis as any other commercial entity…

2. …Changing the payment methodology for these arrangements and reimburse the counties only for the costs of services actually rendered (plus administrative costs consistent with an approved cost-allocation plan) under a non-risk contract.

“We recognize that changing a long-standing delivery system will take time, and potentially, state legislation… While we will not specify a date certain by which the corrective action plan (CAP) must be completed, we expect prompt attention to this matter, and request that the CAP be developed and submitted to CMS no later than 90 days following the date of this letter.”

The letter was forwarded around today accompanied by a jointly signed letter from Jane Beyer, Assistant Secretary at DSHS, and MaryAnne Lindeblad, Medicaid Director at the HCA.

“CMS informed the HCA and DSHS that the State’s method of contracting with counties for certain mental health services appear to violate federal procurement laws.

The federal match for mental health services is approximately $500 million per biennium for the state so this is obviously a very serious matter that needs to be carefully addressed.”

Both the language in the HCA/DSHS letter and the speed with which the CMS letter was distributed appear to be a strong testament to the importance place by the state on stakeholder engagement during this process.

This action could well turn the RSN system entirely on its head. At a minimum, it will likely mean a change in how the mental health system is funded, and likely – ultimately – a hit to RSN and county budgets.

How much of a budget hit will vary in every case, and assumes that there is some money left over for RSNs in their capitated arrangements after services have been paid for.

On the other hand, this could have a huge impact on the system. This could break up the RSN monopoly on state mental health funds, bringing competition for managing and improving the mental health system in ways the RSN system could not do itself.

It could also mean that mental health providers, which receive fixed or “day rate” funds for mental health services (like CLIP facilities) could get paid cost rather than their current rate, which some argue has not been funded adequately.

So, even the front line providers of mental health services could see a significant change in how funding is provided for services.