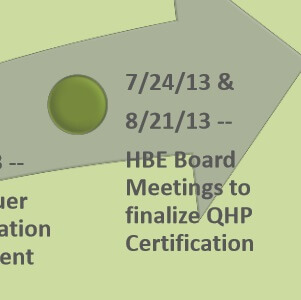 WA: Exchange Plans Will Be “Very Different” Than May Filings

Beth Berendt, from the Office of the Insurance Commissioner (OIC) provided an update on carrier plans to the Washington Health Benefit Exchange Board this afternoon.  She was quick to point out to the Board that the “number of approved plans in the market that you’ll see at the August 21st meeting will be very different than the plans you saw at the May meeting” (the plans that submitted rates and forms to the OIC on May 1).  She mentioned that they were working with plans on their filings and will have all the plans approved by July 16 or 17 so that they can submit the data to CMS by July 31st.  She shared that Molina was ‘so far off’ that the OIC disapproved them very quickly in order for Molina to work on their filing and be able to re-submit a corrected filing.

The OIC is also concerned with plan rates and know that they will change based on the outcome of the exchange funding bill.  Berendt reiterated that she is expecting to see changes in plan networks, plan pricing and the products in the next month as they work with the carriers that submitted plans.  Insurance Commissioner Mike Kreidler pointed that although there is concern about shadow pricing, they aren’t seeing that carriers are re-submitting filings based on the pricing in the market.  “We aren’t seeing what happened in Oregon, here in Washington.”

They are utilizing the CCIIO tool to evaluate plan formularies and found that one plan had 31 issues with their formulary which need to be addressed by their pharmacists.  Berendt did not provide handouts to the Exchange Board because the changes with carriers are happening at such a rapid pace.  She did show them however, information on her ipad which included three categories or colors; green, red and black.  Green indicated that plans are “good,” red meant “we have some problems” and black meant “the OIC was working through the filing.”  She shared that as of today, there were only two plans in the green or “good” category.

When asked about network adequacy and provider reimbursement rates Berendt indicated that commercial plans seem to be utilizing their commercial networks and that Medicaid plans have struggled with reimbursement, although one Medicaid carrier is renting a commercial network.  In terms of network adequacy, plans will either pass or fail.  There is no in-between ground.  She specifically called out PeaceHealth and Kaiser in Cowlitz County.  If Kaiser and PeaceHealth are unable to resolve their issues, Kaiser will not have an adequate network for Cowlitz County (leaving only Clark County with a SHOP market).