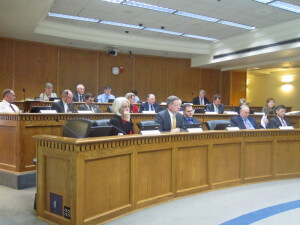 As we shared earlier, HB 1947 was voted out of the Senate Ways & Means committee earlier today. The bill was substituted with a striker amendment which in effect removes all references to the premium tax revenue and the corresponding allocation to the health benefit exchange.  Instead, funding is based entirely on assessments made on the plans on a per member per month basis. It directs the Exchange Board to establish a process to calculate the assessment amount and to collaborate with the insurance carriers, the Health Care Authority and the Office of Insurance Commissioner in setting the assessment and the assessment calculation and payment schedule. Sen. Keiser pressed staff as to how funding would allocated.

Committee Staff: The funding mechanism in this bill is all about the exchange assessments so they would be capturing a per member per month fee based on enrollees.

Sen. Keiser: So the entire operating costs would be on a per member per month fee on the plans?

Committee Staff: In this version, yes. It would also be subject to the budget and how the budget wanted to appropriate money to the exchange if that was the decision that was made.

Prior to the vote, more concerns were raised by Sens. Keiser and Fraser as to the exchange’s ability to operate under this funding mechanism. Staff clarified the requested and currently allocated funds in the House and Senate versions:

Committee Staff: Under current law, the premium tax goes into the general fund as is. The bill that came to committee prior to this [would take] the premium tax portion out of the general fund and put it into a dedicated account that would be appropriated to the health benefit exchange…. Under the current senate budget, the budget funds the exchange at $26 million on an annualized basis which is about half of what the exchange asked for. The House budget gives them $44 million on an annualized basis, so about $18 million difference per year.

So to recap, the House and Senate are $18 million apart in funding the exchange, both proposals fall short of the exchange’s requested amount, the House funds the exchange via the hybrid option, and the Senate proposes funding through the PMPM model effectively pushing those costs onto consumers.

Sen. Becker wrapped up the debate noting that the bill is still a work in progress.

Sen. Becker: We do have fundamentally an issue about how much we fund the exchange. And how we get that money so they are self sustaining. I can assure every member here that we are still working on this with the House and with the Senate members, so that we can come to a good conclusion. There are no games being played. It is a very important topic and one that we really need to pay attention to. This is something that I don’t think any member takes lightly. So, I would like to give you that reassurance.