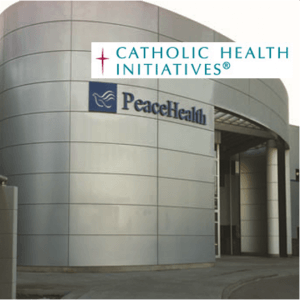 Catholic Health Initiatives and PeaceHealth, two nonprofit health care systems, have signed a nonbinding letter of intent to create a new regional health care system with the ability to improve care and access for individuals, employers and communities across the northwest U.S.

The partnership will create an integrated health system in the region, combining seven Catholic Health Initiatives hospitals in Washington and Oregon with nine PeaceHealth hospitals in Washington, Oregon and Alaska. The new organization will include nearly 26,000 employees and about 950 employed physicians serving in hospitals, physician clinics, outpatient care clinics, long-term care facilities, laboratories and private homes across the region.

The new organization, with annual revenues of almost $4 billion, will build on the strengths of both organizations to better manage care and resources in a rapidly changing health care environment.

Alan Yordy, president and chief mission officer of Vancouver, Wash.-based PeaceHealth, said, “PeaceHealth and Catholic Health Initiatives have long traditions of serving communities throughout the Northwest and providing health services to all people. Our shared mission and combined strengths will allow us to better serve individuals with safe, high quality networks of care built upon more than a century of service in the Northwest.”

The nonbinding letter of intent is the first step in the partnership process. Leaders of Catholic Health Initiatives and PeaceHealth expect to form the new system before June 30, 2013, after completing the due diligence and approval process. The two organizations will be equal partners in the fully integrated health care system serving the northwest region.

Discussions were prompted by a rapidly changing health care environment that demands a more coordinated, integrated approach to the way health and wellness services are delivered to individuals and communities. It also demands the ability to accept more financial risk in caring for defined populations, such as Medicaid recipients. The size and scale of the new organization will allow it to form additional collaborations and networks of care that will include physicians, hospitals, insurers and other caregivers, increasing access to high-quality health services while reducing costs. The partners will reduce costs by making infrastructure investments more efficiently as a single organization in areas such as information technology systems.

The integration of the two organizations is expected to take place over time.

About PeaceHealth:
PeaceHealth is a not-for-profit health care system with services located in Alaska, Washington and Oregon. PeaceHealth operates a large multi-specialty medical group in all three states, laboratories, a Medicaid health plan (Columbia United Providers), and eight medical centers, three which are critical access hospitals. A new critical access hospital in Friday Harbor, Wash., will open in late 2012. Founded by the Sisters of St. Joseph of Peace, PeaceHealth has provided exceptional medicine and compassionate care to Northwest communities for more than a century. Annual revenues are approximately $2.3 billion, with $192 million provided last year in charity care and community benefit. PeaceHealth clinics have more than one million patient visits annually, and serve all people who seek their services. PeaceHealth consistently receives national recognition for quality and innovation in patient-centered care, patient safety, health care technology and cost efficiency.