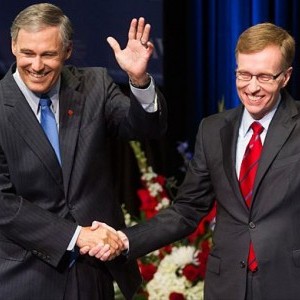 The following is a selection from Jay Inslee’s chat, with his responses to healthcare questions:

Question by Jim Brunner July 26 at 12:01 PM:
Hello. Seattle Times political reporter Jim Brunner here.
Mr. Inslee, with the Supreme Court ruling on the Affordable Care Act, some politicians, including your opponent, Rob McKenna, have continued to express concerns about the cost to the state of the Medicaid expansion in the law. This could cost the state hundreds of millions down the road – do you have any concerns about fully implementing the expansion?

Answer by Jay Inslee July 26 at 12:07 PM
Our concern should be about the fact that the status quo, without reform, is both a huge risk to our fiscal condition as a state and to our individual health. The status quo without this reform is a fiscal threat, both to the state and to all of us who are fortunate enough to have health insurance for this reason. In the status quo, there are hundreds of thousands of Washingtonians who do not have insurance and go to the emergency room when they are catastrophically ill or injured and have no means of paying for their medical care. Sometimes when this happens, hospitals essentially have to “eat” hundreds of thousands of dollars in uncompensated care. Someone has to pay for that uncompensated care, and it ends up being us. Each of us who is lucky enough to have insurance are paying about $1,000 a year in our premiums to pay for that uncompensated care.

The expansion of Medicaid will reduce by the hundreds of thousands the number of these uncompensated care cases, and will reduced our costs both as a state and as individuals while being paid for by the federal government 100 percent for the first few years and 90 percent thereafter.

Question by Daniel V Byrne Washington July 26 at 12:28 PM
Dear Jay: Thanks for taking a stance on reducing gun violence. Once in office, what are your plans to address this public health crisis?

Answer by Jay Inslee July 26 at 12:32 PM
First, thanks for offering a perspective that ties the tragedy of our local gun violence to matters of public health. When we implement health care reform in our state, it will have the benefit of providing greater and more targeted mental health and behavioral services to people, some of whom have ended up creating this unbelievably disturbing violence. This is not an excuse for premeditated violence, but it is a rational strategy to try to protect us all and use cost effective ways to reduce violence and law enforcement costs. Our jails are filled with people with untreated mental illness, and we taxpayers are paying a pretty penny for that cost. Obviously there are other things that we need to do as well that are just common sense, like closing the gun show loophole. It makes no sense to prevent a terrorist from getting on a plane to Spokane but allowing them to buy a gun without a background check.

Answer by Jay Inslee July 26 at 12:34 PM
I’m a supporter of Washingtonians’ access to medical marijuana and was active in Congress trying to remedy this confusing and unproductive effort by the federal government to stop Washington from moving forward on respecting Washington’s desire to allow people access to this personal choice. I was co-sponsor of a bill while in Congress to reschedule marijuana to a different classification.

As governor, I’ll continue my advocacy in vigorous terms. I know too many people with cancer and other ailments who would be deprived of a real benefit if we don’t succeed in this effort. If the initiative passes, I will effectuate the bill and will advocate for respect for its terms by the federal government.

On Friday, it was Rob McKenna’s turn to chat and answer some questions.  Here’s what he had to say about healthcare:

Question by Jim Brunner July 27 at 10:37 AM
Mr. McKenna, despite the Affordable Care Act being been ruled constitutional, several Republican governors have vowed to not accept the law’s Medicaid expansion which would provide more coverage to the poor. Will you commit to implementing the full expansion? Why or why not?

Answer by Rob McKenna July 27 at 10:39 AM
Expanding Medicaid can be part of the solution to covering people without insurance. But as Barack Obama pointed out himself while a Senator, Medicaid is in need of serious reform and is not fiscally sustainable at present. So while Medicaid will continue to be an important component of health care coverage for the poor, we need to focus on helping everyone obtain affordable health care insurance. It’s better for someone to own insurance, even with a subsidy, than to rely on welfare.

Question by Randy July 27 at 10:44 AM
Mr. McKenna, I do not understand. Will you or will you not commit to implementing the full Medicaid expansion?

Answer by Rob McKenna July 27 at 10:46 AM
I will join the expansion of Medicaid only to the extent that the state can afford it and will not allow the Congress to dictate how much our state spends on Medicaid. Much will depend on whether the feds agree to provide the states with more flexibility in how we run the program.

Question by Aidan Charles July 27 at 10:53 AM
Mr. McKenna,
What’s your stance on the Reproductive Parity Act?

Answer by Rob McKenna July 27 at 10:56 AM
I support access to health care insurance for women’s reproductive health, as current law already provides. The Reproductive Parity Act failed to pass the Legislature because it would have jeopardized federal funding for women’s reproductive health, notwithstanding a last-minute amendment that would have nullified the new law. Women can and do have access to insurance plans that include this coverage, as they should.

Question by John Mayo July 27 at 10:57 AM
Why will you not stand with the Republican Governors Association and the Republicans in the US House and Senate in their efforts to nullify and repeal Obamacare?

Answer by Rob McKenna July 27 at 11:01 AM
As I have said from the beginning, there are provisions in the ACA that everyone can support, such as eliminating lifetime caps on insurance coverage. There are other provisions which I have objected to from the beginning as unconstitutional, such as the individual health insurance mandate, which has now been upheld as a tax rather than under the Commerce Clause. Congress will need to go through the 2,700 pages section by section to decide what to keep, now that the Supreme Court has ruled.