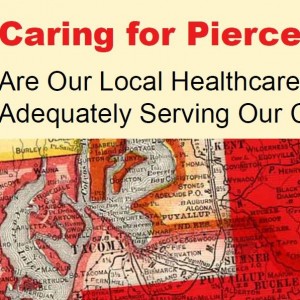 This graph, included in the report, compares the PPU rate of Pierce County with averages across Washington state as a whole and with other specific counties in 2010:

Yesterday, the Tacoma News Tribune ran an article that contained responses to the report from the two hospital groups in question, MultiCare Health System and Franciscan Health System:

The 16-page report includes four hypotheses explaining high hospital profits in Pierce County. However, immediately following the four explanations, the report states that of the first three, which form basis on data open to the public, none are conclusive explanations for high profit margins. The fourth explanation, suggesting the hospitals “post large profits simply by charging more than other hospitals for the same services,” is inconclusive because the would-be supporting data is not available to the public.

From page 10 of the report:

What accounts for the unusually large operating profits of the Franciscan and MultiCare hospitals? Four possible explanations readily suggest themselves:

Hospitals in Washington state submit quite a lot of data about revenues, expenses, and volumes to the state Department of Health (DoH). Much of those data are available to the public. The analysis of those data shows that neither the first, the second, nor the third possible explanations canvassed above account for the high profits of Franciscan and MultiCare hospitals. Unfortunately, the data necessary to definitively confirm or disconfirm the fourth possible explanation are not available to the public.

“MultiCare provides many other health care services, including home health and hospice, primary care and urgent care, behavioral health and more than 90 community services programs that are not reflected in these numbers,” she wrote.