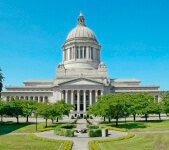 The House Republican Caucus is the first of the four caucuses in the state legislature to put forth a budget proposal.  Introduced by Rep. Gary Alexander (R-Olympia), the Ranking Member of the Ways & Means Committee, the proposal looks to make some modest changes to the governor’s initial proposal, as PubliCola points out (emphasis mine):

The big difference between Alexander’s proposal and Gregoire’s is that the house GOP fully funds K-12 education, budgeting $580 million more than the governor. (Gregoire had proposed cutting $334 million, including reducing state levy equalization money to poorer school districts by $150 million.)

In order to spend more on K-12, Alexander’s proposal reduces the Department of Ecology by 14 percent and eliminates all general fund dollars for the Puget Sound General Partnership, reduces the state contribution to state employee benefits from $850 to $800 a month (the governor proposed lowering it to $825), ends funding for the Basic Health Plan (health insurance for the poor), and reduces health care eligibility for children of undocumented parents from 200 percent of the federal poverty level to 133 percent. The proposal would also reduce the funding to the Temporary Assistance to Needy Families program (TANF).

Of course, the governor’s budget also calls for ending the Basic Health Plan and cutting back on health care eligibility for children with undocumented parents. Other highlights of the House Republican’s health care budget include maintaining reimbursement rates for Critical Access Hospitals and fully funding school-based Medicaid services.

We will be closely following the budget process as it unfolds.