Panelists with diverse expertise and perspectives on biosimilar medicine came together to discuss how to increase the accessibility and affordability of these medications at State of Reform’s Virginia and Maryland “5 Slides” conversation on Tuesday.

Biosimilars have permeated the market since 2015, but unlike more common, widely-replicated drugs such as aspirin, biosimilars have complex molecular structures that require small changes as they are reproduced. Popovian said biosimilars undergo a highly critical testing process under the FDA, and have been proven to be just as safe and effective as generic drugs.

However, they’re not widely utilized, which Ikenberry said comes from a lack of education and awareness for providers. Ikenberry highlighted a national survey from March 2021 that found about half of providers had no experience prescribing biosimilars. Additionally, 44.8% of all respondents and 53.1% of those without biosimilar experience said they were still uncertain about the efficacy of the drugs even after reading educational material on biosimilarity. 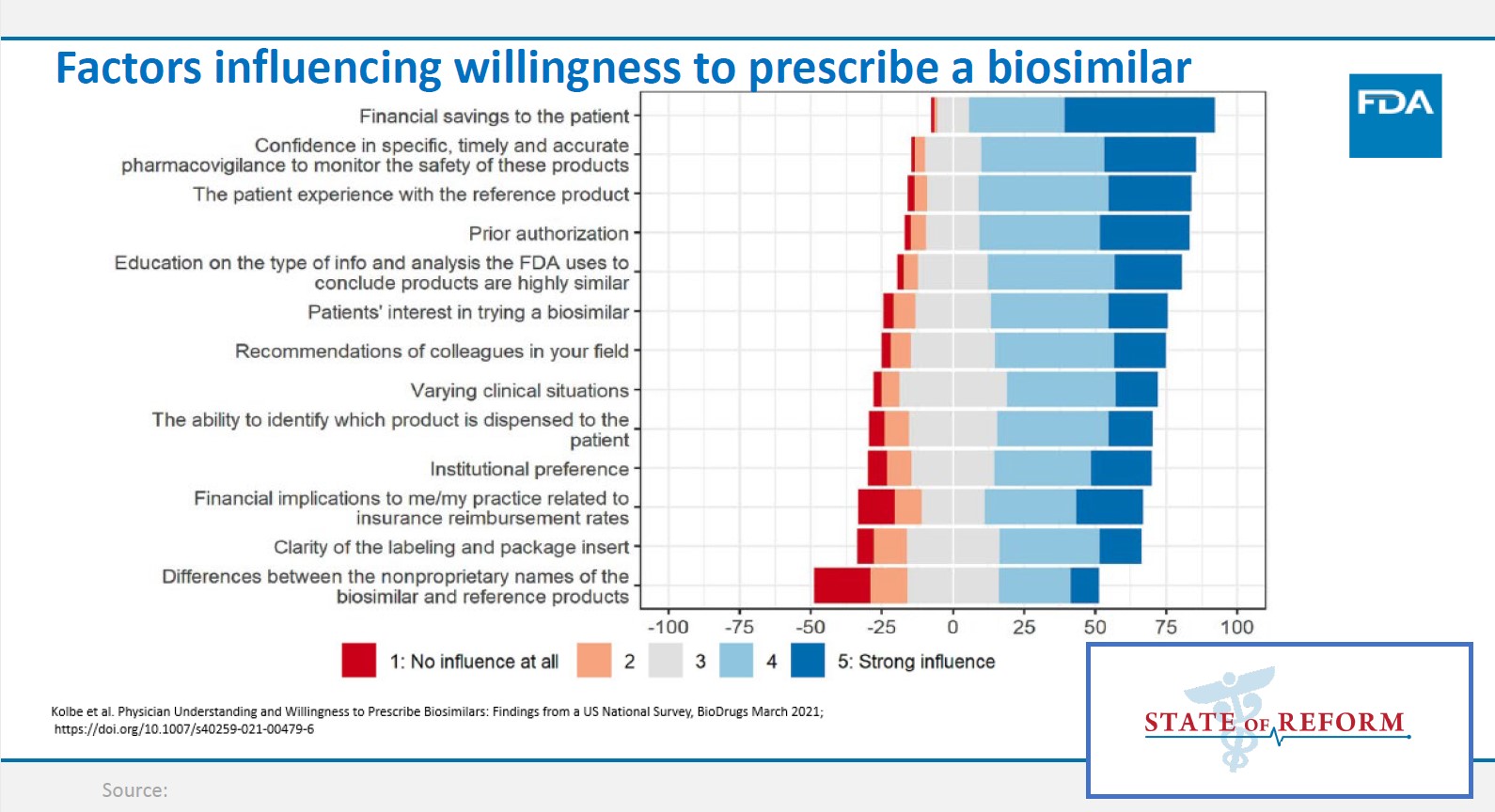 Ikenberry said creating a strong educational pipeline is critical to building trust among both providers and their patients.

Another major issue that the industry should address, according to Popovian, is price affordability, and specifically pharmacy benefit manager (PBM) rebates, which can increase drug prices by as much as 40%.

According to Popovian, some insurance companies might argue that removing rebates would drive up premiums and restrict affordability. In response, he drew from his background in economics and did a study on the potential effects of rebate removals on insurance premiums, and found that removing them would not have a profound effect.

Patel outlined how the high cost of biosimilars can directly impact the patients that need them.

“Put math together: a family — the husband and wife both [being] Medicaid beneficiaries — makes barely $2000 a month. If they have to pay $400 every three weeks in addition to other drugs, how are they going to afford that?… We dehumanize treatment by bringing too many middlemen, by putting extra cost on the people who are least privileged.”

To bring transparency to drug pricing and cut unnecessary costs, Popovian said there needs to be audit rights on PBM fees and rebates, and that they should be accessible to all employers, as well as the federal government, who is the top purchaser of pharmaceuticals in the country.

Looking ahead to the future of biosimilars and drug pricing, the panelists spoke of advances in affordability and access, but highlighted one particular date in the near future. By the end of 2023, six new biosimilars will have been approved and introduced into the market. Popovian said they could be the key in increasing market competition, as well as developing biosimilars for more medical conditions.

“I’m hoping that we will mimic what the European market looks like. You’re going to have multiple classes of medicines with multiple biosimilars available in those classes, and there will be a suppression of those prices. What we will see is that we have better access to those medicines.”

Watch the full video of this “5 Slides” discussion above.