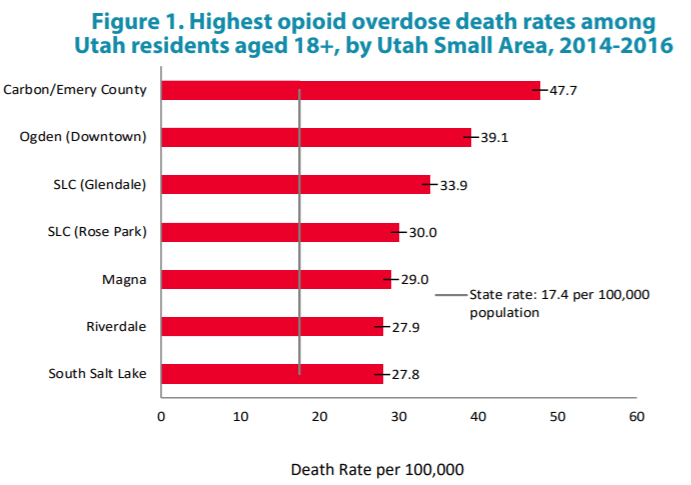 3 reports on opioid fatalities in Utah

Established by UDOH’s Violence and Injury Prevention program in 2017 and funded through grants, the committee consists of representatives from several agencies — including the Utah Department of Corrections, the Attorney General’s Office, the Utah Department of Human Services, and the University of Utah Medical Center.

The committee began looking into individual opioid overdose fatalities in January 2018, piecing together timelines that led to the deaths.

Joey Thurgood, Opioid Fatality Review Coordinator with the UDOH, said each review involves collecting a police report, vital records, and a Medical Examiner’s report and searching a public database for the individual’s civil and criminal history. In some cases, it involves looking at the criminal histories of other parties involved in police reports, as well.

“We’re not just looking at Medical Examiner’s records or the police report,” Thurgood said. “We’re trying to bring lots of partners to the table — EMS, poison control — so that they can bring their records and say, ‘We had interactions with this individual, at these points.’ And by doing that, we’re able to develop a timeline to identify where those opportunities for prevention and intervention lie.”

The resulting reports from a year of reviews each cover a specific at-risk population: One focuses on “hot spots,” where there are significantly higher rates of deaths due to opioid overdose compared to other areas in the state; one is aimed at people with opioid use disorder who were recently released from an institution (e.g. a correctional facility or a healthcare facility); and one covers fatalities from co-prescribing a specific drug — gabapentin — and opioids.

Many of the recommendations carried themes of increasing education and awareness around opioid use, increasing access to naloxone, increasing support and resources, and using specific screening tools and treatments.

According to the press release announcing the new reports, the Utah Coalition for Opioid Overdose Prevention (UCO-OP) “prioritizes and adopts recommendation” included in the reviews.

“The findings presented by the OFRC show a continued need to educate physicians and prescribers on the dangers of opioids, provide adequate and evidence-based substance use disorder treatment for individuals at high risk of overdosing, and ensure naloxone is available in all Utah communities,” Dr. Angela Dunn, UDOH state epidemiologist and UCO-OP executive committee vice-chair, said in a press release.

Thurgood said the steering committee is currently ranking the 50+ recommendations in a survey to prioritize and disseminate the recommendations to their agencies, so that implementation can be monitored and they can evaluate implementation. And, data will be available to inform legislation.

While the recommendations that resulted from the review sometimes overlap across reports, the committee also identified notable findings specific to each population.

For its report on hot spots, the committee reviewed four fatalities in a rural area, the Carbon/Emery County small area, and seven fatalities in an urban area, the Ogden (Downtown) small area — the two Utah Small Areas with the highest opioid overdose death rates among adults between 2014 and 2016. 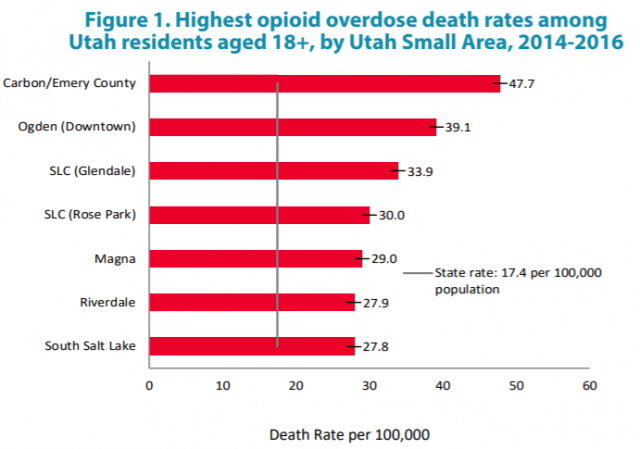 The committee offers a total of 21 recommendations on hot spots. The list ranges from advising health care providers on specific actions, like developing guidance on “best prescribing practices of opioids for patients with traumatic brain injuries,” to recommending the Legislature increase the number of medication assisted treatment (MAT) certified physicians, especially in rural areas.

The recommendations also include that first responders leave naloxone on-scene for high-risk individuals — something the report notes the Salt Lake City Fire Department already does.

Recommendations in the report for criminal justice personnel largely overlap with those included in the report reviewing opioid overdoses in people who were recently released from institutions.

In evaluating fatalities in the recently released population, the committee chose cases in which fatalities occurred within a month of leaving an institutional setting where they spent at least one night.

The committee found that prescription opioids accounted for 32% of opioid overdose fatalities in people recently released from hospitals, while illicit opioids only accounted for 3%. In contrast, 11% of deaths following release from jail, prison, or a detention facility came as a result of prescription opioids, while 28% resulted from illicit opioids. 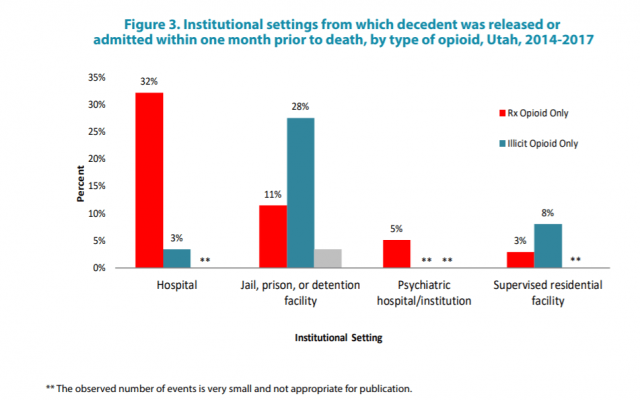 It also found a difference between males and females: The majority of deaths among males happened between the ages of 25 and 34 — in females, the most common age range when opioid overdose deaths occurred was between 45 and 54.

To prevent future deaths in the recently released population, the committee advises that several actions be taken prior to releasing an inmate from prison, jail, or other detention facility. Those actions include: providing risk assessment and referral services at release if they’re experiencing substance use disorder, to begin MAT while they’re still incarcerated, and to expand hepatitis C testing and treatment in jails.

Among the many other recommendations in the report: that health care providers establish “a peer follow-up protocol in hospitals/treatment centers” before releasing someone from hospitalization for a mental health crisis and that they screen patients receiving mental health treatment for substance use disorder.

Thurgood said 11 of the 58 deaths reviewed were related to co-prescribing of gabapentin and opioids.

Gabapentin, this report reads, is “an anticonvulsant drug commonly used for the treatment of chronic pain,” which is “widely perceived as being a safe alternative to opioids, because of the supposed non-abusive potential.”

Prescriptions for the drug across the U.S. increased from 39 million to 64 million between 2012 and 2016, according to data from the QuintilesIMS Institute (now the IQVIA Institute).

The report says that the drug is particularly hazardous when taken with opioids, since both drugs suppress breathing. If gabapentin is taken with an opioid, the report reads, “there is a 49% higher risk of dying.”

Notable statistics in the report: 64% of the deaths reviewed related to gabapentin and a prescription opioid took place in females, and the rate of death per 100,000 people was highest in people ages 45 to 54.

The 12-item list of recommendations in this population’s report is the shortest among the three, and includes recommendations to increase research in order to “better understand the prevalence of gabapentin misuse” and conduct surveys.

A bill that would have established the committee in state statute passed out of the House and passed on 2nd reading the Senate in the 2019 session, but stopped short of the finish line. A fiscal note attached to the bill would’ve created a new position within the Office of the Medical Examiner for reviewing overdose and suicide fatalities.

This year, Thurgood says the committee will begin looking at “current or former military members, veterans who struggle with substance use disorder or died of overdose.”