Last week, Utah’s Health and Human Services Interim Committee held its first meeting since the 2019 General Session adjourned on March 14. The interim committee laid out its areas of focus for the interim and spent time on three of its major priorities.

In his update on Medicaid expansion, Director of the Division of Medicaid and Health Financing Nate Checketts told the committee that, as of last Monday, 29,000 people had been enrolled through the expansion population since enrollment began on April 1.

The state is currently pursuing a “Per Capita Cap” plan via a federal waiver, and would pursue a “Fallback Plan” (detailed here) if that plan doesn’t receive federal approval by January 1 of next year. The Salt Lake Tribune reported in detail on the Medicaid-expansion portion of the committee meeting here. 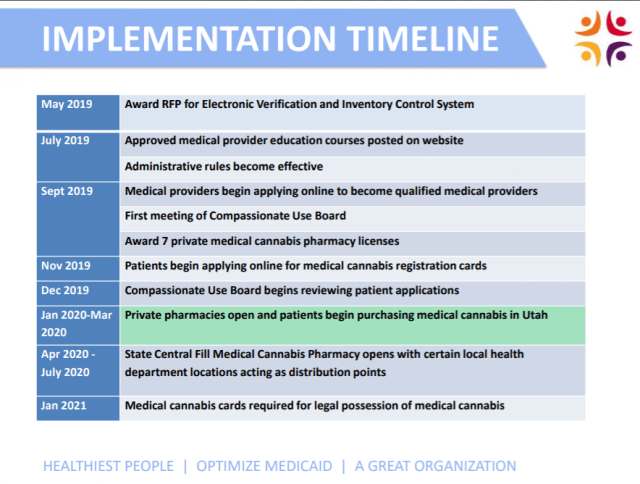 Oborn said the department is on track to make administrative rules effective by the end of this summer.

The University of Utah researchers focused, though, on a study related to state cannabis law the Legislature funded. The study is looking at the impact of cannabidiol and marijuana on pain, and has faced time-consuming obstacles in complying with federal regulations.

“While we initiated this project in 2017, University of Utah approved the IRB [(Institutional Review Board)] very rapidly, because they knew this was of interest to the state. And then, we ran into hurdles at the national level,” Yurgelun-Todd said.

The study is still in progress, but researchers are seeing early results of changes in brain chemistry before treatment and after treatment — at this point, they haven’t separated those results into placebos versus the drug.

Read more coverage on the medical cannabis implementation updates from KSL and FOX 13.

The Legislature appropriated $7.3 million in the budget for implementing the settlement agreement for Christensen et al. v. Miner et al, which involves transitioning 300 interested individuals out of intermediate care facilities and into home- and community-based settings over six years. Read more on the settlement and where it stands now here.

This was the first of several meetings that will take place in the near future — the committee plans to meet every month, aside from July, through December ahead of the 2020 General Session.

Beyond these three implementation oversight priorities, the committee named these items for study and discussion, at minimum, this interim: